The first night of the annual swamphike, we camped among the relics of a very small stone mine. And when I looked up its name (which turns out to not be very imaginative; it's on the flank of y Gyrn, and it's called Gyrn Mine) I saw there was no documentation about it on AditNow. And that always makes me want to jump up, go there, and take pictures! I'd done it before with a mine in the next valley, and with one actually quite far away. I still have on on my to do list for which I need quite some time as it's quite high up in a valley. And there's one quite near y Gyrn; I've walked past it several times, including during the last swamphike.

Does this serve a purpose? Not sure! If there was anything spectacular to see, someone would have already uploaded pictures. But I like ticking them off a list in my head! And if anyone then ever wonders what these mines are like they can just check the site. And it gives me a goal! Sometimes that helps in deciding which direction to have a stroll in.

And how did it go? One Saturday afternoon I popped out to have a look. I got there in about 50 minutes. And in that time, the clouds descended! That didn't help my pictures. But people will get an impression.

On the way back I decided to go over the top of y Llefn. From there I could nicely see Bryn Hafod y Wern! And soon after I was home and made some rice pudding (I had too little bread and too much milk, so what does one do?). And I had got some lovely fresh air! 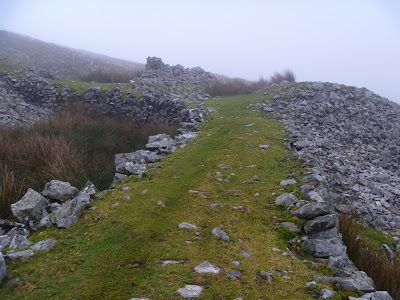 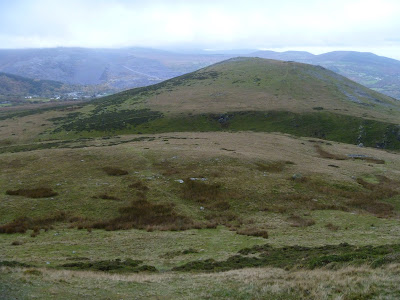 Moel Faban on the way back