Help some builders up a wall

They weren't builders! But there is a big building company in the area that Phil works for, and they have a bunch of office staff that is on a mission to try out various physical pursuits They seem to have been dragon boat racing, climbing Snowdon in the middle of the night, and now they would try indoor climbing. And they had booked a session in a new climbing centre in Llandudno: the Boathouse. I hadn't heard of it! It is, as the name suggest, in what formerly was the boathouse of the RNLI. It's in the middle of Llandudno, which is unusual as normally these things would be right on the shore, but Llandudno is special; it's on quite a peninsula, and by having the boathouse in the middle they can launch that boat as easily on the west side of the Great Orme as on the east side. But they must have gone somewhere else!

Anyway; Phil figured that eight complete beginners would mean not much would get done. So he joined, and asked me too. And I complied! And there was some confusion as he had told me both the  wrong date and the wrong time, but we figured it out in the end.

We drove up and he talked me through who would be there. And when we got there, he introduced me to the actual people. And then the instructor appeared and the session started.

He had to first teach them to tie in. And then he had to teach them to belay. So it was a bit dull in the beginning. But just for in case I had put my climbing shoes on. Phil hadn't! So when the instructor needed a volunteer I was ready. So I climbed up and had him lower me down. And then we did it again, but I threw myself out of the wall, somewhere halfway up. On his request, mind you. Then he let the people belay an empty rope. And then we were ready for the real thing. But there were only ten minutes left!

We made sure that every belayer had a back-up, as people were still rather inexperienced. But people went up! Some with more panache than others, but that was to be expected. And then a lady asked if I wanted to climb. That was nice of her! Later I realised she had told me she had fear of heights. Maybe that influenced her choice between climbing and belaying! And she had been flawless so I was happy to scurry up a few routes with my life in her hands. And then it was over!

It had been a bit uneventful, but I think it really helped that Phil and I were there! Without that, we would never have got to the climbing bit. And that's the fun bit. And it was nice to meet some new people! And see a new venue! I hope all goes well with that place. I like it when people find something cool but redundant and turn it into employment for themselves and others, and some healthy fun for the general public! 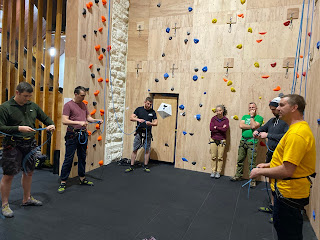 Pic by one of the participants