Quick visit to the Netherlands

I normally come to the Netherlands at some point in summer! But this year I didn’t. I had plenty of visitors, plenty of work on the house to do, and plenty of work to prepare for the new term. And the main draw of the country is my mother, and I had seen her in spring. But after summer comes term, and term is busy. And the risk then is that I don’t come back at all until Christmas! But that would be too long.

This was my year of trying to have a healthier work-life balance. So I should manage to see my mother! I missed her. So when I noticed there was a weekend in early November when I didn’t have anything timetabled on either the Friday before or the Monday after, I decided to book flights. My mother was pleasantly surprised!

As it was only a weekend, I didn’t want to travel around too much. So I decided to just see Monique and my mother. That way the weekend was full! And all the other people I can see over Christmas.

After most of the working day I drove to the airport, and in the evening I reached my mother. Time for a glass of wine! I was a bit sad to see that now, she needs a crutch to walk around in the house. But I suppose that was bound to happen sooner or later!

The next morning I went for my usual run. The autumn colours were amazing! But I was a bit sad to see the current building of my old school had lost its facade. (I went to school in a building up the road, but the school had moved to this building just before my final exams.) It now had a new, glass one! I thought it was very ugly. Such a pity! 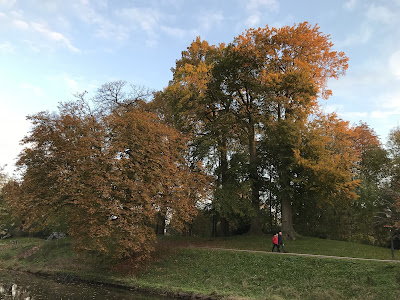 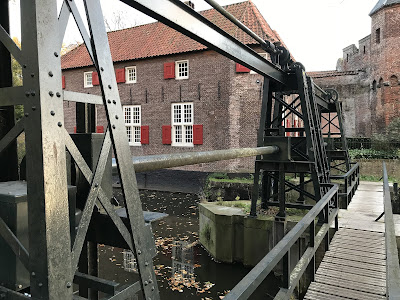 Later that day I got the train to Monique. It was good to see her! Her youngest dog was a bit upset about my arrival, but as soon as I sat down she decided I was a perfect item to fall asleep against. She  would keep doing that until I left the next day!

The next day we first went for a walk with the dogs, of course. It was a beautiful day! 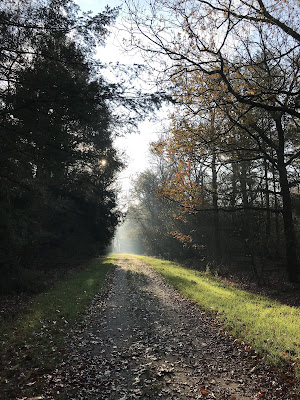 On the dog walk

In the train back I finished my book. And then it was time for wine with my mum again! Later the moon oversaw the conversation as it went deeper. We’ve known each other all my life but still, there is enough to talk about.

The next morning I already had to leave. But I’ll be back for Christmas! And I’ll try to travel by train that time...
Posted by Margot at 08:32