Someone had asked about some entrance not far from Capel Curig on the mining forum. The answers suggested there was not much there. It would be cold and wet though! And then we decided to check it out for ourselves. I found out it was called Glyn Lead Mine later. It sounded uneventful but hey ho, a new venue is a new venue. And the weather forecast wasn't good.

We met at a parking lot. It was raining! David, Paul, Ian and Edwyn were already there. I decided to change in the car. That was easier in the Citroen! And then I waved Edwyn goodbye who had forgot his neoprene socks, and wasn't up for exploring without these.

We started walking. We thought we knew where the entrance was! But we clearly didn't. We rummaged through the woods; Paul and I ended up going a bit higher uphill while Ian and David stayed low. Paul and I had just found the top of a shaft, and were wondering how we could get a look in without endangering ourselves, when we heard a call. David and Ian had found the adit! Closer to the cars than we had expected. The entrance was right at the roadside! We went in, even though it didn't look inviting. It was indeed quite wet!

With rather cold reproductive organs we sloshed our way in. I had expected it to go some 20m or so, but it just went and went! And we found junctions, and stopes, and ladders, and whatnot. And a shaft we shimmied over on a beam. And a shaft going up; maybe we could find the top of it? Maybe this was what Paul and I had found?

Altogether it was a great trip! What a little gem. Yes it was cold but hey, one warms up afterwards. I tried to take some pics but my headlight was playing up and my lens fogged up. David took some too; these are undoubtedly better! We should show this place off to all those who weren't there that night...

When we got out we technically had another adit on the other side of the river on the agenda but we were all cold. In one part of the mine the water had been chest deep! So we legged it back to the cars. The men popped to the pub after having changed but I went home. I had a fire going in minutes! A good end to a good trip... 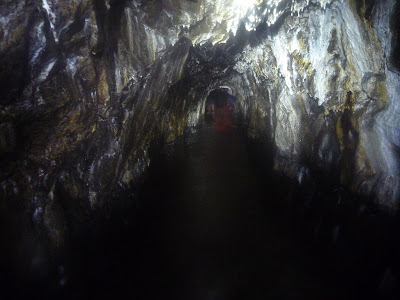 Some lead white drippies on the walls 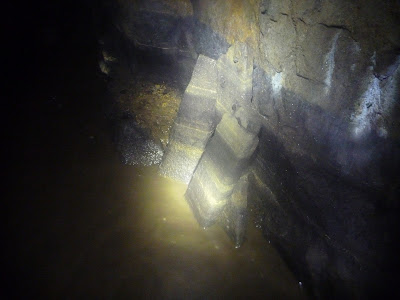 The water must have been higher int he past; notice the lovely tide lines 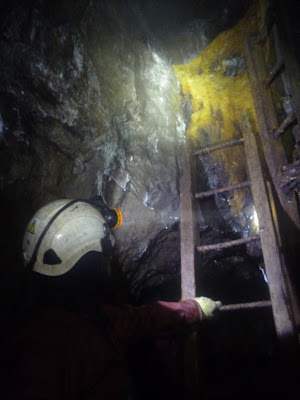 Paul posing with a ladder 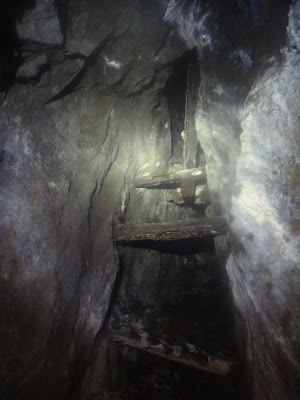 Looking up into a very high and narrow stope 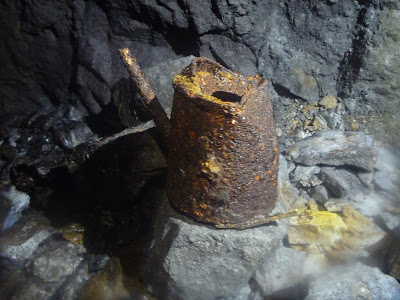