Plastering: a much bigger job

A week before I had started pulling the wallpaper from the plasterboard wall in the spare room. And this Saturday I had managed to peel the rest off. All of it! I hadn't left any base layer like I had done in the kitchen, which was not a wise idea. I still have some wavy bits in the plaster where there is air between plasterboard and base layer. But one learns so this time I was more thorough!

With the wallpaper out of the way, in theory the next job would be: plaster it! I was a bit apprehensive as it was a much larger area than what I had done in the kitchen. But it had to be done. But one needs preparation. So I first removed all the wallpaper from the floor, and applied masking tape on the woodwork. And I applied a sealing layer. And I procrastinated a bit more by painting the cupboard door. On pictures you can't see so well it hadn't had enough coats of paint when the previous owner had painted it. But in real life you can see it! And I brought my lovely platform in from the garage and built it up again. I didn't think my step ladder would be up to the job! And then I had to commit... 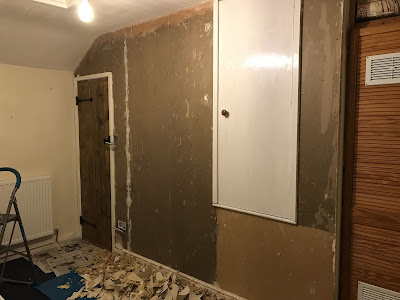 The wall is bare: ready for plastering

I had started to make plaster in the kitchen. I was already jaded so I didn't measure anything; I just plonked some water into a buckets and kept adding plaster until it would feel good. But I soon realised I had overdone the water! So I got another bucket, decanted some of the slop, and brought the remainder int he other bucket to the right consistency. I could start!
I started above the door, in a corner too small to use my plastering trowel. And I worked my way towards the cupboard with the boiler in. And it was not overly easy! And I spilled a lot. But after a while I had myself a first layer. 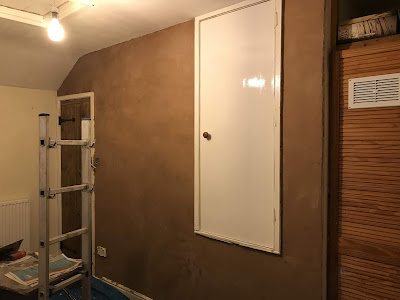 By then I was getting a bit peckish, and I had beetroot for dinner, so I went downstairs. I got some potatoes and beetroot ready for roasting and plonked them in the oven. They could sort themselves out while I would do the second skim! So I went up, added a bit more water to my plaster (it sets rather fast) and did the second skim. That's easier than the first! And when that was done I was tired and ready for dinner. I must have taken a while, as it was ready. 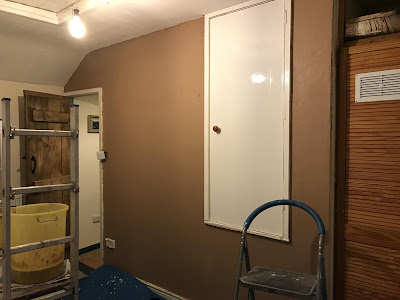 Now I need to buy a bit more paint as I am running out of magnolia. And then I have to paint this. And sort out the bit where the wall touches the ceiling. Pulling the wallpaper off has dislodged some of the paint from the ceiling! And then I should do some caulking, and paint the skirting boards and door frames. And then I have two walls finished. Then I can go and focus on the other two walls; one of which being the one with the damp problem!