A good lamp makes a huge difference underground! I had been using a specimen for the past four years that had been made by one of the Yorkshireman. I had first used a prototype for one and a half years, and then the actual thing for the following four. But in that time I sent it back to him twice. It had issues! And now the third time had happened. I figured there was a wire loose or something. The lamp would switch itself on, and when on it would start strobing. And switching itself to a lower setting. All very unpleasant! Especially the strobing. So I contacted John again. And sent it.

Since the last time I had sent it back I had bought a lamp from Simon, of the Thursdaynighters. He has a side gig selling lamps. And he was clearing old stock! And Miles uses these lamps. If it's good enough for him it's good enough for me. So after the trip in Glyn lead mine I sent off the old lamp and mounted the spare (a Wisdom lamp) on my spare helmet. I still have my old PCG lamp (Not sure when I got that as I didn't blog about it, but the oldest pic I found of it was from April 2010) but I was hoping this new one would be better! I'll find out next week! 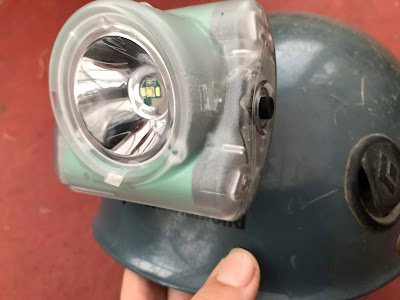