I wanted to ThursdayNighter again after having caused a bit of a stir! It was time to let things get back to normal. I hitched a lift with Chris. He was a bit worried about me! That was sweet. But I had got the issue off my chest so I felt fine.

We would go to Cwm; Paul had bought some cheap turbine and wanted to see if he could install it somewhere in the mine. We didn't have faith in it. Using hydropower in the mine has been tried many times before, with much better equipment in better-skilled hands, and it has remained difficult. So we didn't think he'd stand a chance! But hey ho, a it of faffing doesn't kill. So we gathered at the usual car park. It promised to be a busy night! We ended up being 11...

We walked up under a clear sky. We decided to do a reverse round trip. One of the chaps, Ian, had not been before so he was in for quite a trip. We went down the back vein incline, down the staircase, etcetera, to floor D. When we came to the ladder David asked who would go up it. Ian was up for it! And me too. Nobody else. We got up and onwards. And we went on to Compressor Chamber as we figured the others would go there too. They were busy looking at the old waterwheel. When we went towards them we came across the drill and that distracted us a bit. But after that it was tea time! 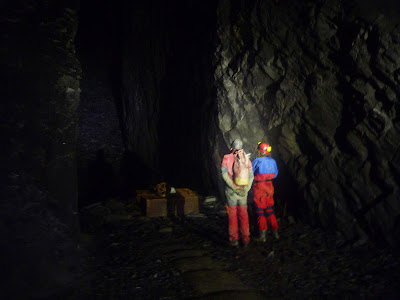 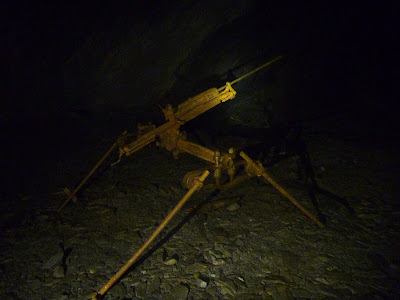 Paul and a whole string of dafties then spent another hour (or so it seemed) wandering around, wondering where to put the turbine and how to connect it. Oh well!

Then we went down to Queen Mary Caban. There we lingered too. Then it was time to come out! It wasn't overly late. And it rained when we came out.

Some then went to Mick for a cup of tea but Chris and I didn't. I like early nights and Chris had to be up at stupid o'clock the next morning. But I feel like things with the ThursdayNighters have been reset! Good!