I can be a bit slow getting things done! I got my driver’s license in my thirties, for instance. But now I think I’ve outdone myself. I had a duvet when I was still living at home. It served me all year around! Which is weird. As it is a summer duvet.

I don’t remember when I started the habit of adding a blanket when it was cold. But the blanket has a funny shape: it’s too short and wide. It does help though!

Another coping method has been sleeping in my double bed. That has a duvet I bought when I was living in Amsterdam. Some time in the nineties! And that’s an all-season thing. A thin and a thicker duvet you can attach and use together when it’s cold.

This week I decided that after some thirty years, I was going to buy a winter duvet, in addition to the summer one, for the single bed. I was a bit surprised myself it took me that long. But it was lovely! I was very snug... 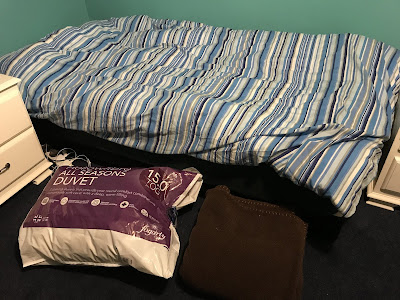 The new duvet in the old cover, and the old one in the new one’s packaging, and the now retired blanket
Posted by Margot at 08:49