I had picked a weekend in November to pop to the Netherlands. Normally, I cook for several days in the weekend, so I don’t have to cook on Monday (home around 10, due to Welsh class) or Wednesday (home around 8, due to Welsh practice) or Thursday (home pretty late, due to going underground). This time I couldn’t. I figured I’d improvise on Monday, and then just do all that cooking on Tuesday.  But then I got an email reminding me of cave rescue training that day. Oops! Forgot about that. Oh well.

The Thursday before I had felt a bit under the weather. And it looked like the underground trip would not go underground at all! It was starting to look like a pub night in Trefriw. And I don’t see the point of driving all the way to Trefriw to drink the one half pint I can have if I still have to drive home, while actually I want to be in bed. So I bailed! And indeed, it turned out to have been a pub night. The right decision. So I had the night off, and this time to cook in advance. And I did! So that was sorted.

That Tuesday I had had hot lunch at work, and drove straight to the training. The main thing was that we needed to be briefed on data protection laws relating to the sort of information the police gives us in case of a call-out, and the sort of information we exchange during a rescue. If we’ve not been briefed we can’t be on the call-out list!

When we were done with that we went to the climbing wall and did some more hauling. We do that again and again but I keep forgetting in between how you do fairly standard things as rigging a Z-rig with safety rope and releasable deviation at the top (for getting the casualty around the corner). We clearly still don't do it often enough! I wish you could buy miniature kit (belay devices, jammers, karabiners, pulleys, etc) so I could practice rigging at home, for not much money, and using not much space. Maybe you can actually; if anybody knows about that do give a shout! 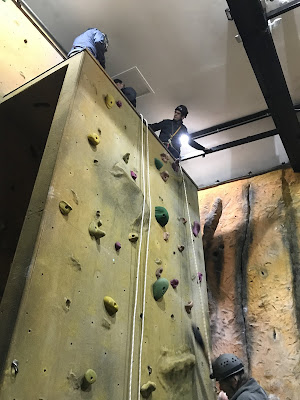 unspectacular pic of the climbing room

When we were done it wasn't very late. Good! We put the kit back and then we could go home. Or rather, everybody else could but not me. I had parked behind the building. There had been space there, in spite of lots of fire brigade vehicles. they were doing an exercise too! Some others had been parked at  the front or the side.

When I got to my car I saw a big lorry thing there, with a bus-like vehicle behind it. Oh dear. That looked like a complicated situation. It turned out the fire brigade was done, but the bus thing had had gear box trouble and couldn't drive off. Two remaining fire fighters were trying to winch it on top of the lorry! And that was hard; the vehicle was so wide it only just fit on top, and winching it on was a precision job. And it had to be tilted to get up, but that posed the risk of it dragging with its bum over the ground. Oh dear. But they did it! And not much later they had moved out of the way. An unexpected tail end of a rather uneventful exercise! 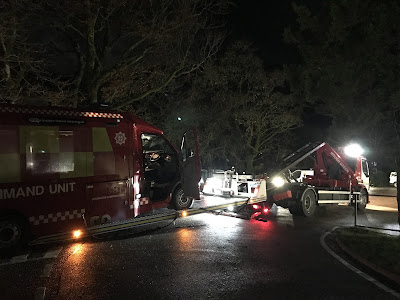 big stuff in the way