Day of pootling with the ThursdayNighters

It would be a beautiful, sunny day. Should I spend it on my ceiling? Or maybe on the roof of my garage (which leaks like a colander)? Or should I be tempted to hang around with the Thursdaynighters? They would have a day on Anglesey; Neil the American was in the country again, and Phil (I think) had organised a day with admiring Parys Mountain from the surface, and then look for a slate quarry (or mine) near Trwym Eilian. I decided to go with them. I don't hang around with them very often these days, due to me spending many Thursday Nights in the dig. And Neil the American would be there, and Phil would show up with wife and dog; that's always nice! So I went. In the morning I did some chores as we would only meet at noon.

When I parked up I already saw David's Landrover. Neil was there too. Then Chris and Phil (et al) appeared; we could go! I decided to just bring a camera. I didn't think we would be awfully long, and it was sticky weather, and I didn't think it would be comfortable having a bag on my shoulders. I Had done a good sunscreen session at home, and was wearing a hat! It was rather sunny...

We set off. Millie (the dog) scampered all over the place. We saw some bits I had seen and some bits I hadn't. And we did a lot of standing around! As the TN tend to do. And I'm not good at it. I never was and probably never will be! And especially not in this heat.

We saw the big pit, and the manager's offices, and an adit (from the outside), and the settling ponds. By then I was sort of maxed out. But we continued to the windmill and an engine house. Not only I was feeling the hardship of the day; the dog clearly had sore feet! These sharp rocks are unforgiving to dog paws. Poor thing. We looked into a gunnis as well, and then went back to the cars. I was hungry and thirsty! We had some lunch together. Luckily I could sit down in the back of David's car. 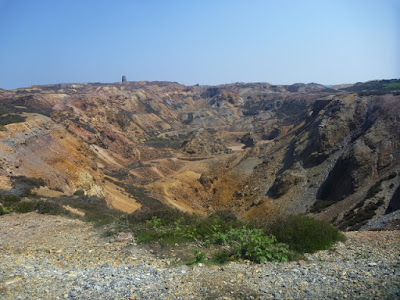 Obligatory picture of the big pit 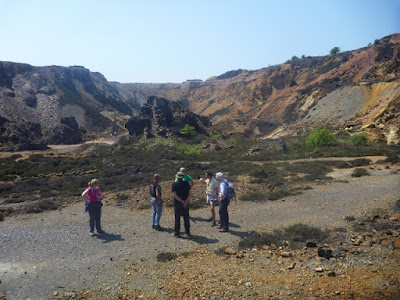 Talking to a passer-by. In the distance the ruins of an engine house. 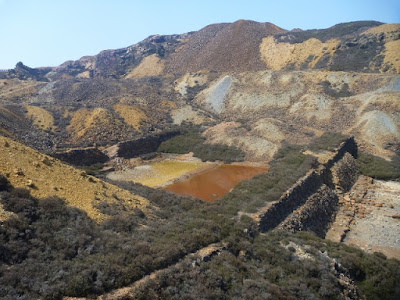 Two of the many settling ponds 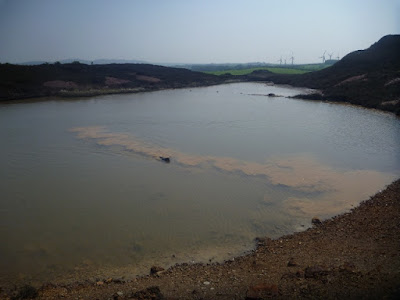 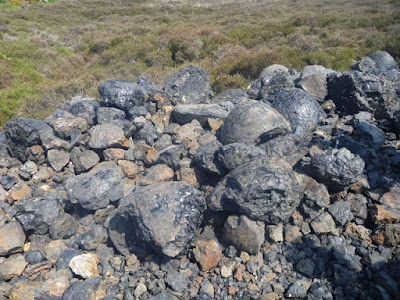 Strange conical blobs of slag. Why?? Mick and Jason looking into the gunnis 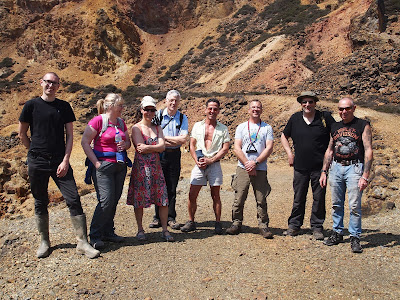 We then would go to Trwym Eilian. It's nice there! I decided to go along with it. It didn't sound like a long walk and I could potentially just sit on my bum while the others did a recce. When we parked up I threw into my bag anything that could come in handy: the rest of my lunch, and clothes. Paul and his Canadian friend Lexi showed up too. We went off!

We walked along the road to where the coastal path diverged. And we followed it. And followed it. I thought that thing was close to the lighthouse! Was I making the right decision? I had a mild headache and sore feet! And this just kept going. Oh dear.

Then things got ridiculous and everybody agreed we must have overshot the mine. We were looking for steps going down! Where were they? Ed and Jason scooted one way, David another, and with Chris I went somewhere in between. I put on trousers first. There was hostile vegetation!

We walked to the edge of the cliff. No stairs to be seen! But we did look into a quarry. I noticed it was free-climbable. I went down! And had a look. Not very spectacular! I climbed back up. By then David had gone somewhere else. Jason said he had found the top of the steps, but that it required a machete to get to them comfortably. Not many people were dressed for such a wade through brambles! So it was decided we would go some other day. We went back! 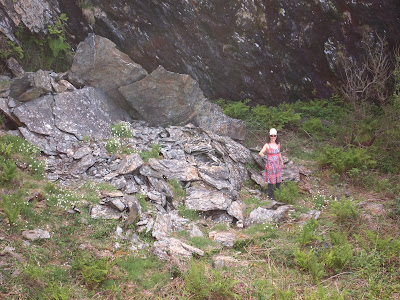 Me in the quarry. Pic by Chris. I had forgot where I had put my camera so I didn't take any myself!

From the path we had seen some hole of sorts on the beach; Lexi, Paul, Ed and me went to have a look. It went about two meters! Then we were back at the cars.

The others wanted to go for a curry, but I had had it for the day. I needed solitude and lots of water! So I drove home. It was good to see the TN but in hindsight it may have been a bad idea to choose a hot day when a lot of standing around was expected. Oh well! One learns.
Posted by Margot at 07:31