When I bought the house I already figured I would take the dish off the facade. It's an ugly thing! And I don't use them, as I don't watch TV. But other things had more priority.

Then one day I decided to go for it anyway. I plonked the ladder against the house and had a wiggle. Of course the nuts wer rather rusty! That means you have to use a lot of force. While standing on a ladder. Hm. So I decided to take one easily undone bolt out, then put in a bolt with hanger, attach  myself to it, and then try again. But the neighbour walked past, saw me be difficult, and offered to give me a hand. He is a retired house painter; he's spent half his life on ladders. He had the bloody thing off in no time!

The house looks a lot better now! One trip to the recycle centre and there's hardly a trace left of the ugly thing. Great! 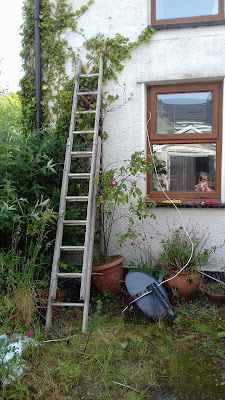