Sometimes we celebrate birthdays underground. A reasonable thing to do! I've done mine too, several times. But this week we had a special one: a first birthday! Thursdaynighters Simon and Briony had got a child and he was to join our trip to Pen-y-Ffridd. I hadn't met the kid (Charlie) yet. hadn't seen the mother since she had become a mother, and hadn't seen the father for a while either. So the dig could wait; we would be witnessing a small kid being baffled by the world in general but a cake with one candle in it in particular.

David suggested to first check a hole in the ground nearby, so he, Paul and me left early. We found Chris already there, and Phil arrived soon after. So with the five of us we checked out said hole. It only went a few meters. Oh well, now we know! We went back to the parking lot. And soon Simon et al arrived! It was nice to see them. And the broodier among us (cough *Phil* cough) were very happy to see Charlie.

Charlie was only moderately happy to see us; when he saw Paul he spontaneously burst into tears. He seems to have something against large quantities of curls! Oh dear. But then, when we were pretty much ready to go, Miles rolled up in his enormous Landrover. Charlie immediately shut up! Simon is a bit of a petrolhead; maybe Charlie inherited some of that. But we grabbed the food and the frying pan and suchlike and went minewards.

When we got there we realised we hadn't lugged firewood in. We normally do, and leave it to dry, so the next time we can burn it. We went back to get some more while the fire was already started. We found a nice oak that had fallen over because a pine had fallen on top of it. We sawed several logs off it and lugged these, and the intact crown, into the mine. The logs went to the side to dry and someone put the crown up as decoration. With an oil lamp hanging from it! Very atmospheric.

The first round of bacon was already finished. We had a feast! There were also flapjacks and bread pudding and whatnot! I had brought tomatoes (goes well with bacon baps) and plums. And Charlie got fish pie. He seemed to have a great time! As long as Paul kept his distance. 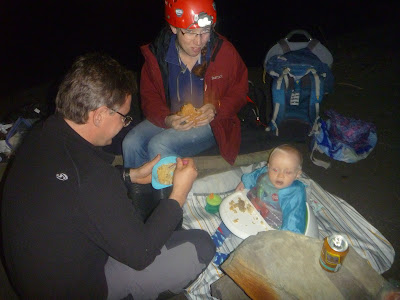 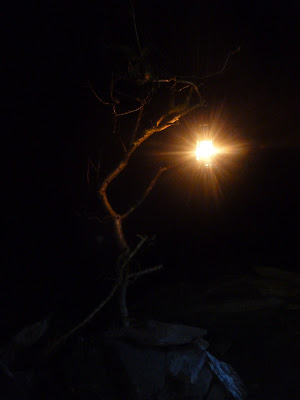 The decorative tree
Miles had never been in Pen-y-Ffridd before so he was advised to have a look around. But he hadn't quite understood the evening and thought it was an outside BBQ and hadn't brought a helmet. He borrowed one and had a look around. He was a bit surprised to see the awful state the slate was in. How was this stuff lucrative? By the time we came back the party was breaking up. Next year again? When Charlie can walk and talk? With an underground legend like Simon as a dad he might have a rather undergroundy youth! 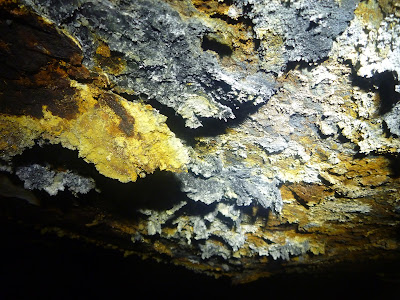 Awful quality of the ceiling. Pretty though!
Posted by Margot at 08:22