Wedding of Mark and Karel

A long, long time ago, I was doing my PhD in Amsterdam. I was just one in a long list. Slowly, those who started before me finished, and new faces arrived. One chap starting after me was a geographer named Mark. And two others were Emma and Stefan. I got along well with them. Mark and Emma even came to visit me when I lived in Plymouth. And Stefan I had later met in Bern, at a conference.

Mark was already in a relationship when he came to the VU, and that stayed that way, so at the first departmental Christmas do I also met his boyfriend Karel. He worked as a jeweler; he had come straight from the Millionaires' Fair to the christmas party. He was still in his work outfit: a white blazer. That intimidated me a bit. Luckily he turned out to be a nice chap nonetheless. And normally more inclined to wear T-shirts...

When I was already living in England I saw on Facebook they were getting engaged. Lovely! And then they were entering "ondertrouw"; something like the banns. They were not only getting married; it looked like they were going to do it soon! And then Mark mailed me to ask for my address... and indeed, an invitation came in the mail!

England is some distance away, and Mark didn't seem to really expect me to come, but England is only one flight away, so that's reasonable for something as unique as a wedding. I know, some people marry many times, but Mark and Karel were clearly being thorough about it. They had been together for yonks!

So on a Sunday in June I got into my wedding-associated dress, then into the train, and only some 20m away from the church in which the ceremony would take place I got into my heels. I have learned from the previous wedding: bring a bag that's big enough to keep an extra pair of shoes in, otherwise you'll be hurting for days! Then I came to the church, and started looking for the right door in. I crossed two well-dressed young men; I wondered if they came for the same thing. After having seen all doors and still not found an obvious one for the wedding, and with them still walking around looking confused, I asked. They were indeed also wedding guests! Together we just rang a doorbell, and were let in through the kitchen and hallways of the church. And reached the nave. We were early; nothing particularly wedding-esque was as yet going on. 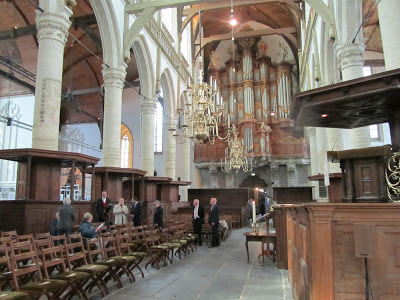 Interior of the Old Church

I had a walk around. This was the Old Church; it is still used for services, but also for things such as exhibitions. And today it would do both. The wedding service would be in the nave, with the World Press Photo exhibition surrounding it, in the wings. 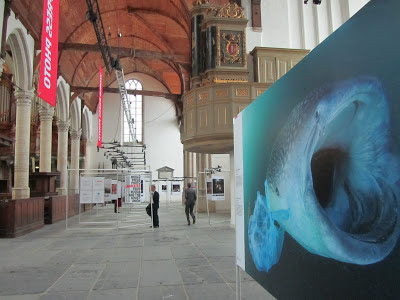 World Press Photo was on too

When I was looking for a cloakroom I saw a sign "access to the tower is at one's own risk". Access to the tower? I didn't know we had it! I surely was going to try that. Plenty of time. I clambered up, in my heels, and after three sets of stairs I heard voices. It turned out I was reaching the bell-ringing level, where a seasoned bell-ringer was instructing his apprentices for the day. He heard me come up, told me I wasn't really supposed to be there, but if I sat down on a bench and didn't get in the way I was welcome. They were about to ring the bells for the wedding...

First the bell symbolising "love" was rung for one minute. Then the other bells (one was "hope"; one must have been "faith". And the other "luck"?) would join, and altogether they would ring for another seven minutes. I felt privileged to witness that. In the bell tower of the Old Church of all places! And then I had to get my arse downstairs for the service! 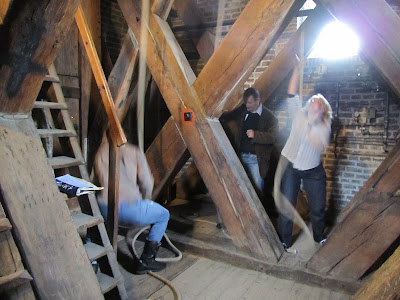 Ringing the bells for love

I had left the pews empty, but during the tolling they had filled up. I saw Emma, and joined her. And after a while, a choir walked past, followed by the happy grooms. They were beautiful! But they ended up seated out of my sight for the church service. And I'm not really one for church services. I contended myself with looking at the church...

After more than an hour we all moved to another part of the church, where Mark and Karel would exchange vows. Mark started; he had a lump in his throat the size of  house. His voice was all over the place! So sweet! Karel kept his cool a bit more. It was very touching. And after that, and some more singing, suddenly Karel was handing out holy bread, while Mark joined the choir. Normally he's in it! 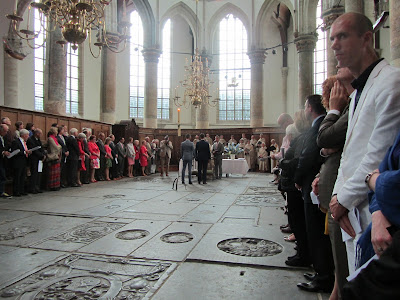 Mark and Karel about to make their vows

I let the wine and bread pass me by. I'm happy to sit through a church service if that is what a marrying couple wants to take place, but I steer clear of too much participation. Luckily this was a very tolerant service; the godless were welcome too. And then it was time for coffee, cake, a sandwich, and then Emma and me had to get ourselves to the station; the reception was a bit west of Amsterdam. On the way to the station she said "look left!"; she's been living in the UK for a while too, she knows what effect it has...

When we came off the platform there was another smartly dressed man standing there. It was Stefan! He had come to pick us up with his car. We had had no idea! That was very nice of him. Together we found the estate, and walked up the lane. After a while we saw Mark. He and Karel were waiting for the wedding photographer. And we weren't supposed to be there. We'd missed the signs to the orangerie, where the reception would take place. But it did give us a chance to kiss them! 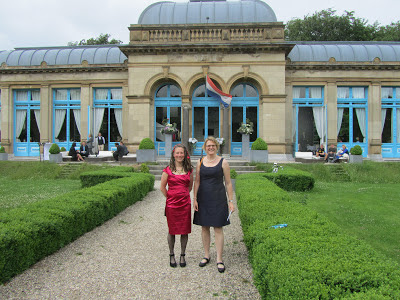 Emma and me in front of the reception venue. Picture by Stefan.

After a cup of tea we were told the newlyweds were on their way, and asked to form an honour guard for them to pass through. Once inside, Mark would speech, and then they would open the champagne bottles. Mark made a bit of a mess, but hey, he's a geographer. And then we all drank to the new couple! 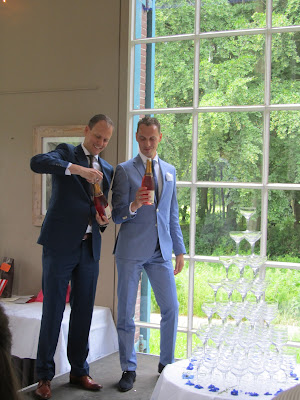 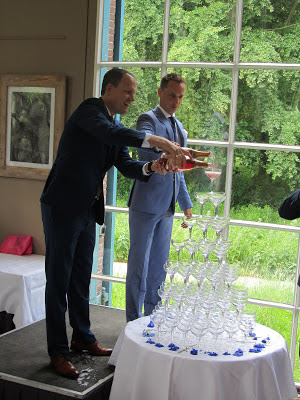 Mark managed to at least get some into the glasses (notice the puddle!)

At a wedding, you rarely have time to actually talk to the newly wedded couple, and this was no exception. I managed to get Mark's attention for half a minute; that was it. But it was special to have been there and to witness this! It was a beautiful day, and I hope they look back on it with pleasure, for the rest of a long and happy married life! To Mark and Karel!