You can't always judge for yourself. There is not enough time. And when you leave it to other people to judge something, then why not the Nobel Prize committee. Just to name something; I know little of poetry. I do own a collection of poems by Wislawa Szymborska (in translation), which I have read cover to cover, and enjoyed greatly. And her talents had earned her a Nobel Prize. So when Seamus Heaney would appear on the Festival of Ideas, I trusted the Nobel judgment, and got me a ticket. Not entirely at random; the Guardian had featured a long article on Heaney in the "review" pages some time ago, and I had liked what I had read. So now I would have the man himself read some more to me. 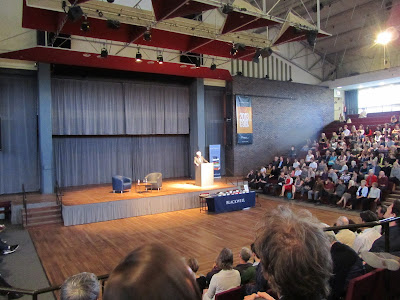 Heaney in the Central Hall of the University of York

A glorious introduction from the chairman taught me that his name wasn't pronounced "seam-us" but "shame-us". As I said; I don't know much about poetry. Then the laureate himself took the stage. And this man had about 50 years of poetry to choose from, and about an hour to spend. We would only scratch the surface! But how well did he do it. He turned out to me a most gentle-spoken man, with plenty of patience to explain to the audience what some obscure words meant, and what sagas some of his poems were inspired by. I won't reproduce any poems here as I think it would breach copyright, but there is a few on the wikipedia page. 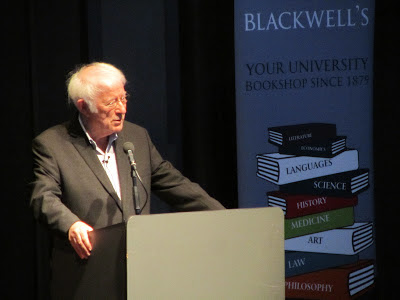 When time was up he took a seat and got ready for questions. I was wondering what on Earth one could ask. But the first question was an immediate hit: "is there a poem you really wish you would have written but still haven't?". He didn't hesitate. "Other people have written those poems!" A next question was received well too. "My brother had to study your poems at school, and he described them as "death and potatoes". Do you perhaps have two or three different words to replace these?" Here he laughed. "Pure genius!" There were more questions, but I stuck to that one, and when it was over I bought his book "North". I'll report back! I hope I agree with that jest...