It had already been six weeks since Hugh moved north. I heard all the stories, but he’s not such a hysterical broadcaster of his life as I am, so I had to construct an image of his new home in my mind, based on verbal information. And that was fine for the first few weeks, but that was it! I missed him, and wanted to see for myself in what place he had landed. I had only been in Liverpool once, and that was quite a brief trip. So in my first weekend in the north I unpacked. In the second I went to Wales. And on the third I went to Liverpool! (Yes, Suzanne Vega fans: on a Sunday!)

I got into the train, with my hot flask and the newspaper, and had a nice two hours, looking at the sunny countryside rolling past. I especially liked the northern limb of the Peak District I trundled through. And when I got to Liverpool Lime Street I followed Hugh’s advice and got a cab to his place. That would turn out to be a wise choice!

Hugh had a plan. He first showed me his modern and spacious apartment. Then he served me a cup of coffee. And then he stuffed a CAMRA pub guide into my handbag, and we were off. We would first go to campus, where I saw his office. Then we’d go to St. George's Hall. Unfortunately, there was a ceremony (probably a wedding) going on, and he couldn’t show me the view we had come for. But we tried!
We wandered around some more (luckily the pub guide came with a map; six weeks isn’t enough to get to know a city like Liverpool, especially if you spend some of these six weeks rather far away from it, like in Japan), and had lunch in a pub. That gave us energy to wander around the docks with their monumental buildings, like the Royal Liver Building. Very nice! We also wandered past the Museum of Liverpool Museum, the Albert Dock, and the Church of St Luke, which isn't a church anymore, and which at that moment was clearly in use as a concert hall. Such things are difficult to keep secret in a building without windows and a roof. And then it was time for a pint. If only to give my feet a break. 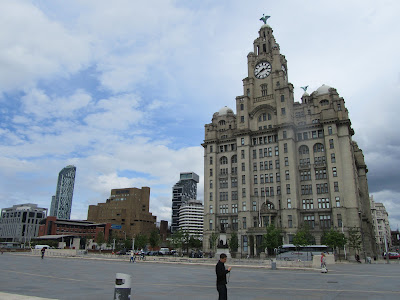 The Royal Liver Building with Hugh in front of it 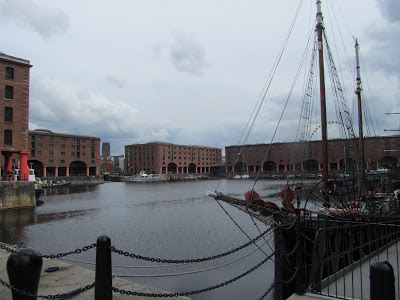 Hugh knew a pub where they had proper Australian beer, so that was the one we headed for. But they had sold out of the stuff! We settled for American beer. And then we walked to our last landmark: the imposing mass of Liverpool Cathedral. What a Moloch! But the gate was closed. Another wedding! We couldn't get in. Pesky newlyweds all over town. Oh well. That cathedral looks like it isn't in a hurry to go anywhere, so I might see it from the inside on another trip west. 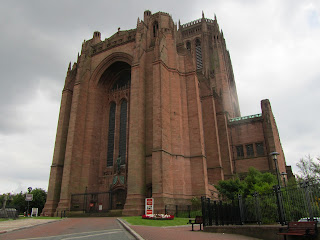 And then it was time for another pint, and then dinner. And then some whisky at home, and bed! The next morning my alarm would go early, to get me back to York at not too late a time. It was not a long visit, but it was very nice! We had six weeks to catch up on, and an entire city to explore. And we did quite a good job on it, methinks! And in two weeks I can reciprocate!
Posted by Margot at 09:02