Agen Allwedd with the YCC

Caving kit: check. Snacks: check. Water bottle: check. Sleeping bag: check. I was ready for my first YCC caving trip! And then there was knocking on the door. Laura, one of the girls I'd met in the pub on Wednesday, came pick me up, with her boyfriend Sam, who I'd not met yet. We then proceeded to the house of Richard and Nicky, who had also been present in the pub. And after some tetris-like trying to get all the kit into the car, we were off!

We discussed bicycles and cameras and runs and hikes and commutes and whatnot, while driving through the rolling hills. It was a bit strange to be following the signs "the southwest"; I just came from there! But if that's what it takes...

Midway, we had a change of drivers. And quite soon I had a change of state of consciousness. Moving house is tiring! I fell asleep. I woke up when we got to the hut; it was already 11PM. There were already quite many people there; some from the Chelsea Spelaeological Society, who own the hut, and then folk from at least one more club. Nice! They were all very friendly. I managed one beer, and then I went to bed.

The next day we'd do what they called the "Aggie grand circle". I had no idea what that was, but it seemed to be a 6-7 hour round trip, in a cave officially called Ogof Agen Allwedd. Not too challenging, but with very slippery passages, apparently. I woke up to the sound of bleating sheep (we were in Wales, after all) nice and late, but not any later than average; this club clearly isn't the Early Bird Caving Club. We ate a hearty cooked breakfast, and got ready. One of the YCC guys would go with another trip, and we got one chap that was YCC, but a bit of a long distance member: Kevin, living in London, but here with us. So it was six of us (Laura's boyfriend would stay above the surface and take pictures, and we had Matt, who had travelled up earlier) setting off along the old tramline, with its amazing views. And shortly after 11AM we went underground. 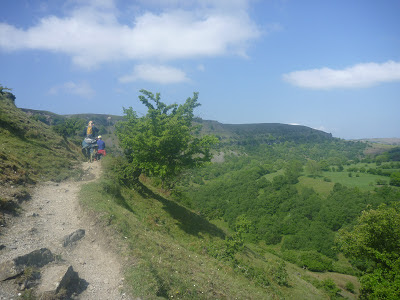 On our way to the entrance

And then things moved fast. We did some crawling, traversing, boulder-choke-negotiating,  splashing through a stream, clambering over rocks, doing all these things one does in a cave. And then we came to a big open space.

From there we went on: there was little time to take pictures or to usher the impressions of the cave into one's long-term memory. We just kept moving! More crawling, traversing, boulder-choke-negotiating,  splashing through a stream, clambering over rocks. Two of the men (Matt and Richard) were navigating; they each had a little description in a little ziplock. That just had to do! What could possibly go wrong in a 32.5 km cave, the longest in Wales? But they had both done it before. And it happened a few times they had to really search for the way on, but never very long.

Most of the route was rather straightforward, but there were some obstacles. At one point there was a climb, with a double rope dangling from it; we came up, clipping into loops in the rope. All that faffing with your cow tails (what you clip in with) makes it impossible to elegantly climb; you need your hands for securing yourself all the time. But it was fun! Another obstacle was a rift, in which we had to climb to a higher level; the men all just scampered up, but all the ladies were a bit hesitant. I am scared of rifts! But by the looks of it, not more scared than the average YCC female! The men were true gentlemen, though, and gave us all a hand, and happily we went on.

What was an obstacle for only me was sight. My lamp only lasts for about an hour on a fairly good beam, and after about two hours you really have to change batteries. With this 6-7 hour trip in mind, I had taken many, but it did mean I needed a break every two hours. And for some strange reason, my left eye fogged up. It looked like I had been wearing a contact lens all night! Daft. And not very practical. But I managed, although I did have to let the others go ahead at some point, as we were in the slippery streamway, and I had been using my batteries for 2 hours. I couldn't see a thing, and the streamway prevented the others from hearing my shouts. I had to just change without them noticing. Kevin had stayed behind, so he lit up the scene. It might have been half an hour later when we found the rest back.

We didn't take many breaks; this trip takes long enough as it is. We sometimes stopped just long enough to eat a candy bar, and we stopped at both places where there was a mug attached to the wall, at an especially pristine flow of water coming out of the wall. In the beginning we were making a good speed; Matt expected us to be out by five.

And then it was three. And the prognosis moves backward. And it was four. And five. I put in my last set of batteries; the last set is non-rechargeable, so they last a bit longer. If they ran out I would have to swap to my spare lamp! Which is fine; it's a good lamp. And I have a hand torch in my bag. But that would be it. No more light after that. And this was turning into a long trip. I was starting to feel it.

At 6:50 we were back in the big chamber. I was knackered! And the others too. Matt predicted it'd be 45 minutes to get out. Richard didn't believe it; he thought we could do it in 20 minutes. But Matt's evaluation of everybody's exhaustion was rather accurate; it was 7:30 when I saw daylight again. I was glad to be out!

We walked back to the hut. Soon we saw some shapes on the path; it turned out to be the chaps from the other trip, who'd come out an hour before us. they looked all fresh! They had had time to shower. And when we approached the hut we smelled BBQ; we saw Sam guarding that piece of desired equipment. This is the life! 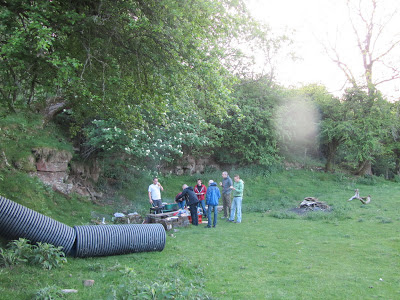 I showered, changed, grabbed a beer and went outside. The meat was just ready! The light was fading, the sheep were bleating, everyone was happy and it was a wonderful evening. I also got to know the guys from the other trip a bit. They were lovely! I clearly made the right call coming out on this rather daft adventure. Nothing like caving until you can hardly stand up anymore (we all had that) and then having a good meal in a beautiful place with a beer and nice people. Hurray for the YCC! 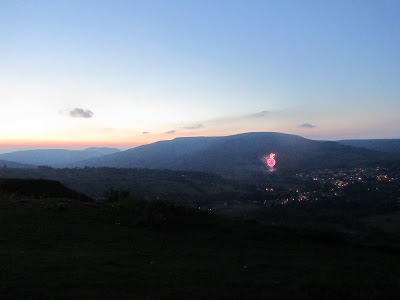 As utter bonus, there were fireworks in the village below
Posted by Margot at 08:16