Home for the bikes too

I have a courtyard! That means my bicycles don't have to live in the kitchen! So if I want to bike somewhere, I don't have to drag a bike down the stairs. Spiffing! But the advantage of a kitchen is that bicycles stand dry there. And my courtyard isn't roofed. Or rather, it wasn't. I figured that it couldn't be too difficult to make some sort of awning over part of it. So I went to the DIY shop and asked for advice. They pointed me in the direction of undulating plastic. I then wedged some timber in between the walls, screwed the plastic to it, and ta-dah! I had a bicycle shed. Bob seems to be my uncle. It hasn't rained yet, though. 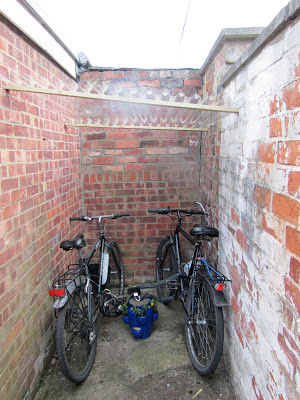 There they stand, nice and dry under their translucent roof!

But that wasn't all; I also I don't want my bikes to get stolen. So even before I moved in I had had a lock put on the back gate. And that isn't enough! Just that I'm not paranoid doesn't mean someone's not after my bike. So I decided my bikes had to be not only on a locked courtyard, and not only locked themselves, but also locked TO something. But what? I rent this place. I can't go and screw enormous eyes into the wall. So I pondered a bit. Just something big and heavy, like the foot of a parasol, would probably already be a significant nuisance to a thief. But they might not be easy to fix a lock to. And they are unsightly! And then I remembered flower pot my Plymouth neighbour (the nice one) had put in his courtyard: a so-called strawberry pot, with not only an opening on top, but also six little side openings. What if I would fill one up with concrete (except the side openings) with a ring sticking out at the top? That would be quite an impediment to the opportunist thief, but it would look nice too. So I went for it!

I bought the pot, the concrete, and a steel ring fixed to a plate. I put long bolts to the plate so the righ was well fixed, I covered the side holes, and then I filled the whole thing up with concrete. And half an hour later I had a bike anchor! The water probably hadn't percolated all the way through, so it was probably still powdrey in the middle, but persistent plant watering should solve that over time. And even still part powder, and without the flowers, the construction already weighed 18 kg! That should be enough. And I put petunias in the openings. Not yet all of them, as the lower openings were draining a bit too much water still, but I'm quite proud of my decorative, self-invented anti-theft device cum plant nursery!And as long as there are no sob stories of bike theft appearing on this blog it must have worked! 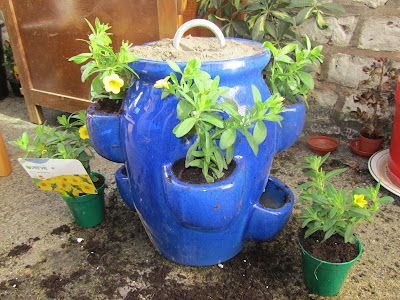 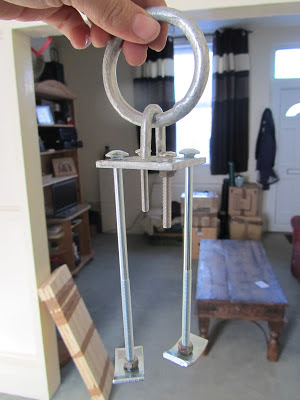 The ring with its fittings- there's more to it than sticks out!