When I got to my new house it was almost empty. But not entirely. There was some mail; some flyers for restaurants, some bags from charities who hope you fill them up with clothes and have them collected again, some mail that was really for me, from utility companies; and a flyer for a demonstration. It caught my eye.

It was a flyer from the TSSA (Transport Salaried Staff’s Association); it said that the English Defence League was using the tragic death of Lee Rigby as an excuse to publicly vent their political ideas at the war memorial for railway workers who perished in WWI. And that they did not want "their" memorial to be used as a venue for fascist propaganda. And they invited everyone to come and counter-demonstrate that Saturday. (They say it better themselves here). And I thought it might be a good idea to do just that. I'm not too fond of the ideologies of the EDL, and I think it is important that I, and those who agree with me on that front, make that public once in a while.

But first things first. The letting agency had only given me one set of keys; that scared me a bit. What if I lose them? So I went into town to have them duplicated. And on the way back I went to the war memorial in question. There was already a handful of people; all very left-wing-looking. I saw TSSA flags, and someone from a local anti-racism group, and lots of people of the Socialist Workers Party, and a guy with a shirt that read "some people are gay - get over it"; that didn't look too EDL either. I chatted a bit with those present and they informed me that the EDL people were in a pub around the corner. And finally, two appeared. They boldly unfolded their banner, which was immediately obscured by TSSA banners. 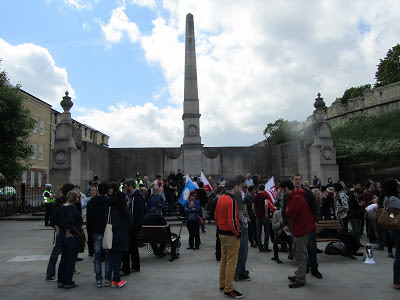 More people appeared. Some of them clearly EDL; the look seems to be bald and wearing a woolly hat. And having a St. George's cross somewhere on the clothes. Surprising? No. Most people arriving were clearly anti-EDL; they were very predictable in their outfits too. And there was quite some police to keep an eye on all of that.

At 2PM sharp, the anti-fascist protesters kept 2 minutes of silence for those commemorated by the monument. The EDL clapped their hands. At some points there were some heated arguments, but both sides of kept things civil. The EDL laughed mockingly at the TSSA. A TSSA chap yelled "off our streets, fascist scum!" And that was about as heated as it got. Good! I like it when all sorts of people leave each other in peace.

And then I left. I had a house to turn into a home! But who knows; even though I'm not employed by the transport sector, and am not a socialist worker, I might bump into these people again. My first full day in York and I've already been political. Who knows what will follow!