The day after the day before

I had been warned there might not be too much enthusiasm for an underground trip on the second day of our weekend away. And my enthusiasm had drained with my batteries; I had managed to charge one set, which is one comfortably lit hour. And we were in South Wales, which is also beautiful above ground! And the weather was nice. So we all decided to stay at the surface.

The two couples decided to go for a run. And the others planned a walk. One of the guys had a nice route in mind, and with three cars we set off to its start. I was in the first car. After a few minutes the phone rang. It turned out to be Kevin, who was last in line in his shiny new rental car. He had driven it off the road! We immediately knew where he'd have done that. There was an impossibly sharp and steep junction near the hut; that must have been it. And it was.

It turned out Kevin had used his handbrake to safely negotiate this turn. But it was an electronic handbrake, and the car's computer had decided at some crucial point the handbrake had to come off. And hop, off went Kevin into the fence. Luckily it held; the slope below it was steep! But the car was lying on its bellyplate on the curb. 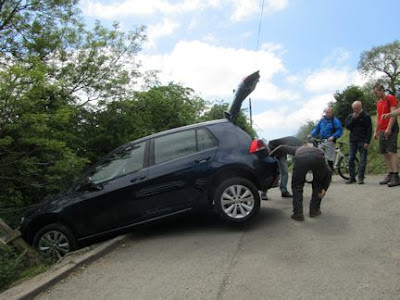 Our first attempt was phoning the rental company, but they didn't asnwer the phone. Then we went to plan B: trying to get Mountain Rescue involved. We had seen their vehicle just down the road. Such a Landie could pull the car back onto the road! But the team members were far away on a hill. Bummer.

Somewhere along the way a chap passed us on a bike; bike nor chap were the newest model. He looked at the situation, and said in a Welsh accent you could build large buildings on "ah, a modern car!" That summed it up.

Plan C was asking for help from a guy who had stayed in the hut. He had a Landie! He even had a hand-winch in his car. Unfortunately, the rental car had much more friction with the curb than the Landie had with the tarmac. We only dragged that across the road. That was no use! 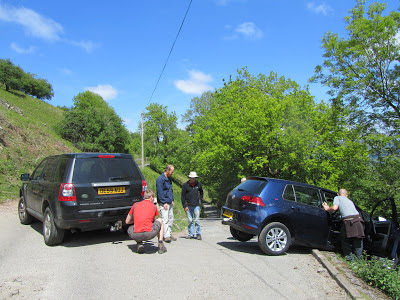 Plan D was getting Mountain Rescue involved after all. They showed up, but they were afraid of insurance issues if they would damage the car when pulling it out. Understandable! We decided to just try again with the winch. And then a car appeared. We felt a bit bad; there was no way it could pass! But when Kevin went to talk to the driver he came back with good news; the chap's father had a farm nearby, and was probably willing to drag the car out with a tractor. That sounded promising!

The father was phoned, showed up, pulled the car out, accepted some financial thanks, and buggered off again. Some things are so simple when you have a tractor! But by now it was so late we decided to can the walk. Instead we went to Abergavenny for lunch. And then we drove home! Kevin felt bad about the whole incident, but we would probably all have beached that thing there (there was little sympathy for electronic handbrakes in this company) and it had been an interesting experiment trying to get it out of its precarious situation. It was a nice day after all! And we've learned things: 1) don't buy a car with electronic handbrake 2) be friends with farmers 3) if you drive your car off the road, do it on a sunny day at a location with lovely views. And with friends around. Perhaps not with bloggers around, though.... 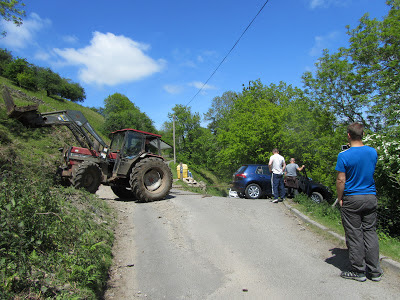