Last day in the southwest

On Thursday, the removalists would come and pick up my stuff. They had another job first, so they'd be there around 4PM. Which suited me fine: I could leave my house in hospitable condition until the last night, and then have almost the whole day to pack up the kitchen and living room. And in the evening I would go to spend a night at Pete's. And then drive off the next morning!

It almost went that way. I was happily packing the kitchen at noon when suddenly the movers phoned. They were there already! With a van. They wanted to already take the boxes. That would make manoeuvering the large bits of furniture easier. They placed the boxes in the van. I doubled my packing speed.

When they ran out of boxes, they started to take away furniture, and placed it all on the front lawn. The luton that would take all to York would be there at 4ish. Or perhaps a bit later.

When almost everything was outside on the lawn I had an idea. I had to give the keys back to the letting agency, and that's easiest on bike. There'n no parking anywhere near their office! So I suggested we emptied the house, and while they still waited I would deliver the keys on bike. And only then hand it over to the removalists. That saved me hassle! When I came back the sun was still beating down on idle movers. One was lying face-down in the sun. The downstairs neighbour (the nice one) had mercy on us, and came out to offer us a drink. Very nice! I gladly accepted. I hope he'll like the next tenant. I also asked what time the luton would take off. To my horror, the answer was "5AM". I had to be there before them to open the door! Oh dear. Finally, at 4.45, the luton arrived, with three men in it.

With so many hands, the stuff was quickly (re-)loaded, and I could leave. I was held back a bit at the gas station (I wanted air and fuel for the long trip!) where some daft chap blocked the way for what seemed hours, but before 6 I was at Pete's. 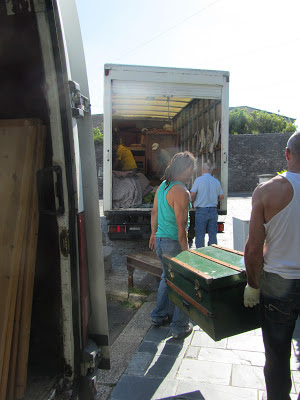 Pete suggested we'd go to the Clovelly for a Last Supper. A good idea! After a pint in his back garden we set off. In the pub we met Sabrina, and I mange to flag down Rupert too. I know he lives nearby, and he hadn't been able to make it to the PCG goodbye meal. And he is a part-time hydrologist, so I figured he'd like a pint with us.

After the meal we went home. I was very aware of the time my alarm would go off! Pete and Sabrina had tried to convince me to set off later, but I would feel bad about showing up hours after the removalists. Not that they had negotiated the arrival time beforehand, but still. So feeling even stranger in the stomach that in the preceding days I wished them a good night, and went upstairs. I set my alarm to 5AM (that is not the same as setting off at 5AM, but I feared being too sleepy to drive) and slept well. A last night in the southwest! A good one. Thanks, Pete and Sabrina! And Rupert!
Posted by Margot at 11:33