My very first trip with the YCC made it clear: I needed a new lamp. I used 16 batteries on that trip, and if it would have taken any longer I would have had to switch to my spare light, which only had the batteries that were in it, and no spares. I need to make sure I can do a long trip without running out of power! It's clearly feasible; all the other guys managed. So when I got access to the club website I asked for advice on the forum. And there I received the recommendation to buy a Petzl Duo 14 LED, and customize it with a ready-made adaptation set, and then regard someone called Bob as my uncle. These customization thingies seem to be easy to install, and make these lights much brighter. So I decided to go with that! 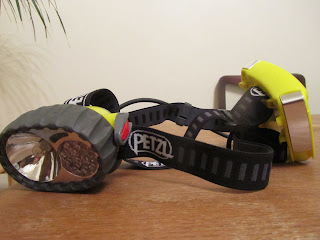 I found a Petzl Duo on eBay, and it arrived soon. I compared it with my old light; not anywhere near as bright, but hey, this was before customization, and also, that energy efficiency needs to come from somewhere. A few days later, the adaptation set came, and then it was time for me to put that into place. A bit scary; I have never customized a headlight before! But the instructions were straightforward. First thing; open the lamp. Hmm. The website itself says, after three pages: "Invariably, the biggest problem is getting your Duo open in the first place, which can be challenging if it has been together for some time and been used as a caving lamp. Tyre fitters hands are a bonus for this task. We didn't like to mention that at the start (-:". Hmm. Tyre fitters hands? I have none! Even though the lamp was new I didn't manage to make it move as much as a millimeter. 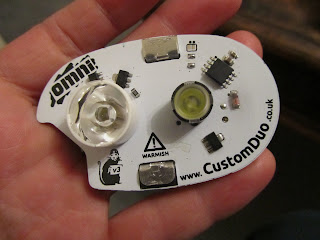 What to do? Find yourself a bloke, of course! By coincidence there would be a YCC pub night a few days later, and that would be brimming with strong men. So I made sure to bring the lamp! The first man to venture too close to escape my distress was Matt. He hardly had to make an effort. The worst was over now! 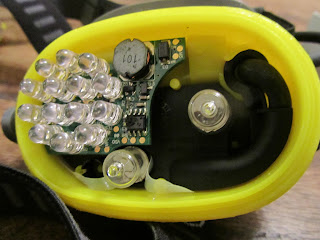 Fitting the module in then really IS easy. you remove the light bulbs and LEDS, you click the module into position, and you're ready to go. Piece of cake! 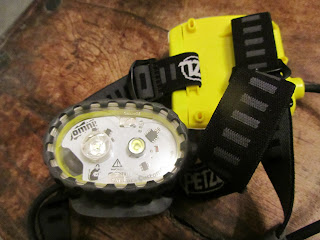 The next time we go underground will be in early July. I look forward to play-testing this thing! I have no clue how these modules work, but they seem to be the best thing since sliced bread. I'll see!
Posted by Margot at 09:33