I woke up at 4:57AM. It was already light! And in all likelyhood, this was the moment my stuff started the journey to York. I got out of bed, got my stuff together and sneaked down the stairs. I tried not to wake my hosts. Downstairs I put the kettle on; I'm not setting off on a 500km drive at 5AM without coffee, if I don't have to. 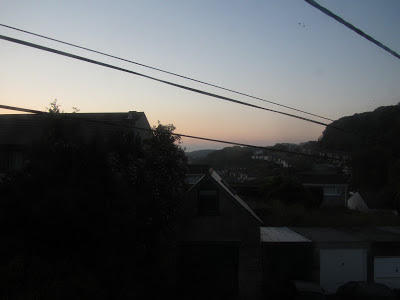 My aim failed. I heard Pete! He lingered in the lounge while I wolfed down some cereal. And then it was time to go. I hugged Pete and got into my car. It was 5:30. The Off I was.

I had the radio on BBC4. The weather was nice. All was going well! I hoped to get to Bristol before morning rush hour. And that worked. Just past Bristol, still before 8AM, I stopped for a coffee. This was going well! The car was in top shape.

I did the same with Birmingham. I made sure I got past, and then stopped. By then I could even do with some fuel! And I took my jumper off. It was 10Am and the sun had gained in strength.

I was still driving on an A4 with the signs to follow. Works well! But when I got to the vicinity of Leeds there was some mismatch between my list and the signs I encountered. So I switched on my TomTom (my car doesn't have a cigarette lighter, so I can drive on satnav for a limited amount of time only) and saw that indeed, I was going the wrong way. But that was quickly corrected!

My plan had been to drive to the railway station, park the car, retrieve my bike, ride to the letting agency, get the keys, and then bike to the house ot open the door for the removalists. They had phoned me; there were there before me.

My plan failed on the "park the car" bit. Too many other people had already done that! So I decided to drive home instead. The removalists had my other bike! So that's what I did. The movers, who said they had been waiting for an hour, were not too keen to hear they'd have to wait for some 45 minutes more. But what can one do? I thought getting to York from Plymouth at 12:30 was quite good. To want more would be greed!

I biked to the letting agency, which is downtown. And that's no place for cars. Bikes already struggle to negotiate the tourist-clogged streets. But I got there, got the keys, got the inventory and a contract, and off I was. And then the unloading could begin!

The men quickly carried everything in. The first thing I did was plug in the fridge, and put my Dutch cheese in there. And then I helped them re-assemble the bed; it had had to be taken apart to small bits to come up the stairs. And it's a bugger to assemble. But then I had a bed! And that was almost the last thing. 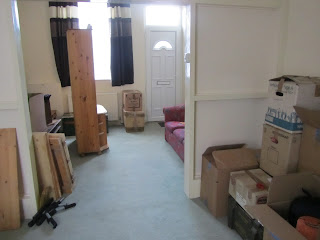 What the place looked like when the movers left

I paid, waved the men goodbye, and sat down on the couch. I had moved! Let the unpacking begin!