One of the things I've learned from moving from country to country is that it helps to join groups of sorts when you're new somewhere. Nothing like a local to show you where good times are to be had. And one needs friends! So I made sure that when I moved up to York, I had a caving club lined up. I had googled the nearest; unsurprisingly, that turned out to be the York Caving Club, and has established they take on members. Their contact had already kindly informed me of trips in the pipeline. And he mentioned they tended to have pub nights on the first Wednesday of the month; that was convenient! Less than a week into my York residency I would have an opportunity to meet them.

It turned out they'd meet in a small village south of York. And the University is to the south too, so that was easy. I biked down there, first over footpaths (a bit daft on bicycle) and then the road.It was a nice route! I crossed underneath an old railway line - these are clearly not only a feature of the southwest - and then I heard the swish-swish-swish sound of something being dragged along the wheel. And on close inspection I saw a thorny branch, firmly wedged into my tire. Oh no! I hadn't brought a repair kit! This could be an evening of defeat. I might have to phone a cab to get myself and my bike home. I pulled out the thorn, and was glad not to hear the SSSSSSSSSSSSSSSSS of a puncture, but there might be a small one still. Hmm. 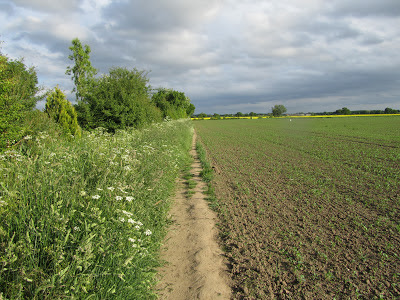 I was the first to get to the pub. I got me a pint and read the newspaper. Then a chap appeared; he introduced himself as Nick, and said he hardly ever showed up at YCC events. Oh well, he was here now! By the time my pint was gone the others started appearing, including Matt, with whom I had corresponded so far. It was a nice small group; 8 YCC cavers and me.

None of them, by the way, had a bike repair kit with them. Oh dear! But I went out to check; my tire was still firm. I had gone away with it. This was my lucky evening!

Talking over dinner gave me an idea of the differences between my caving Alma Mater, the PCG, and the YCC.  The YCC consists of members broadly in one age category, and they do mainly away trips and digs. The almost 50 year age differences of the PCG are a far cry from that! And they look, at first sight, like the differences in caving ability might also be a bit smaller here. But even here, they rely on Rick's knowledge! Before coming to the southwest, he was a Yorkshire caver, and he even wrote a book about the local caves that is still a respected work of reference. He's here, in spirit! Hi Rick!

The next actual underground trip they had planned was that very weekend. A bit soon after I'd moved in. But then again; one can't start to make a life for oneself soon enough. So I decided to join! Immediately a place in a car was arranged for me. And then I decided it was time to head home. My tire held, fortunately. The next day I had to pack my kit, as the day after that we'd leave soon after work! And then my new caving life would start...