Back to wet mine with ladders

Two weeks before we had explored a mine that was new to us. And we had seen that there was a vertical entrance! So we would come back and try that one. And David was also keen to explore a ladder way; it had two ladders in it and one of them was rotten, and they didn't reach to a platform we could see. So we came back with rope and ladders and whatnot!

I had also attached a cut-off piece of tile to the back of my helmet to stop it from sagging forward under the weight of my newest lamp. It worked well enough!

We were a smallish group again: David, Edwyn, Iain and me, and a new bloke called Ed. So we kitted up, grabbed the ladders and set off.

I saw David, who was at the front, was overshooting the entrance, so I shouted out. And we got the ladders to the entrance. Which was a bad idea. The entrance is very wet and swampy and unpleasant! And we had the ladders for the top entrance too, and we would do that first! So we went back to the road and overshot the entrance, this time on purpose. And we tried to find out way up the hill, ladders and all.

I was up at the front with the ladders in my hand but I found it very difficult to navigate while carrying ladders and not falling over while negotiating treacherous terrain in the dark. So after a while I suggested we drop the ladders and go scouting without. Then when we knew where we were going, we could come back for them! And soon David shouted; he had found it. We grabbed the ladders and went there. But then we first went a bit further on too, to see if there was more. We found a little hole in the ground! We all started peering in. It looked small!

I decided I'd try it anyway. I took the dangly bits off my harness and slid in, feet first. But I wanted to go in on my belly. But I didn't have space to flex my knees in the right direction! And I wasn't keen going on my back; then it's hard to push yourself back out if you can't turn around before doing that. So I bailed! 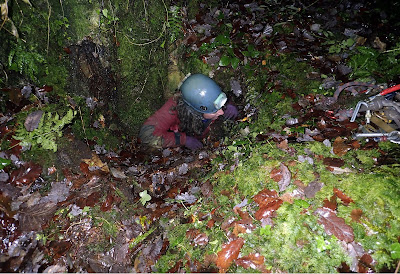 Trying to get in. Pic by Edwyn

Then Ed tried it. And he managed! It looked tight. And it wasn't big where he ended up. But we've explored it now! And then we looked a bit at the big lump of concrete that stood over it. And then we went back to the other hole. We thought. Where was it again? After some inelegant bushwhacking we found it again.

Soon we realised there were two holes. Interesting! We tried the one we hadn't spotted the previous time first. It wasn't a shaft; we could enter without rope work. But we got to a deep drop soon. It was really warm in there. And there were bats! So we decided we should back out. Better come back in spring! And the other hole would probably be full of bats too, so we left that one. We walked back down. And this time I decided to follow a faint path I had found. It turned out to be a much more comfortable way down! I should remember than for the next time we need to go up.

We went back to the adit, took off our harnesses, and walked in, ladders and all. We first stopped where we thought the hole at the top dropped too, and indeed recognised it was. Then we went straight to the ladderway and put the ladders up. I was the first to climb them! I reached the platform we had seen the previous time. But that was only about one square meter big. Not much there! And there was more on the opposite side of the vertical passage, but it didn't look like you could easily get there. It looked like I would have to lug up both ladders while standing unprotected on the small ledge, and then lean them on the other side against a rotten timber that hung above some deads. It just didn't look enticing! I came down again. Then the men had a look and decided they just needed more ladders, and a drill, and some bolts, and then they could perhaps get into new ground. A next time!

We explored to the far end, for those who hadn't been there, and then we went out. We were cold enough! We left the ladders for the next time so we had little to carry.

On the parking lot we changed, and then looked a bit more at the map. Where did what we had seen fit in there? And then we called it a night. It had been a good one!