I was ready for it in summer! But I had to wait until winter. I had been promised a rather bulky encyclopaedia of foraminifera by our commercial partner. And they seemed to have had to jump through quite some hoops to actually be able to hand it over!

It was November when they contacted me again to say it was sorted. Could I come get it? And I could! We have school vehicles one can book. The van would easily be big enough to move that thing around. But then they suddenly realised they had a van themselves. And they offered to bring it!

I cancelled my van booking and asked some friendly people to help me lug. And then on Tuesday morning they phoned. They were here! And it turned out they had parked up at the Marine Centre Wales rather than Craig Mair (where my office is) but that was quickly sorted. I had got the trolley ready at the lift!

You would think the lift would get the trolley to the correct floor, right? Well think again. For some reason we have a lift that goes one floor up, and if you want to go higher you have to get through a double set of fire doors and then take the other elevator. Why? The lower lift looks retrofitted, but would they really have designed a building that is only accessible by stairs? Did they not think of either wheelchair users or, say, people lugging furniture around? Or trolleys full of microscopes and samples and whatnot? Anyway; I took the first trolley up and unloaded it on the first floor. We could do the rest later! Then Brian took a load. And was gone forever. He had taken it all the way to my office! Then we could do the last batch. I started unpacking while the others retrieved the boxes from the first floor.

The boxes weren't labelled so I didn't now in what order they came! But I sorted it. And I soon realised I had way too much shelf space! I could fit most in, and on top of, extant furniture. I'm chuffed! I now have so much reference material. And my office smells of very old books! Foram research, here I come! 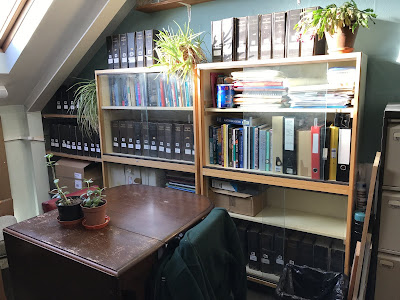 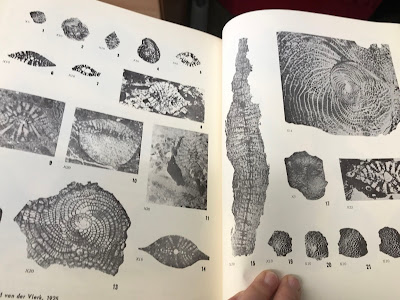