My mother isn't particularly fond of needlework! Actually. But she is good at it (by my standards) and she likes variety, so a bit of sewing is welcome. So last time I was in the Netherlands I had given her a dress! It had a bit of a plunging cleavage; so much so I only wore it with a vest underneath. But I like wearing it on days when it's too hot for two layers. So I had asked my mum to sew a little piece of cloth in the cleavage. But there was some fitting and refitting going on and it wasn't finished when I went home.

This time I had brought the curtain that hangs in front of the cupboard on the landing. On the picture there you can't see it's a bit too long! But it is. And as I travelled by train I could take more stuff. I brought it!

That is how I came home after Christmas with an adapted dress and a perfectly sized curtain! Cool stuff! 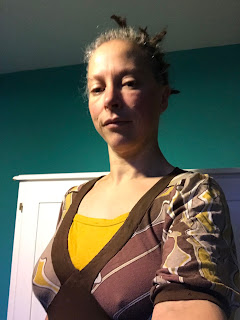 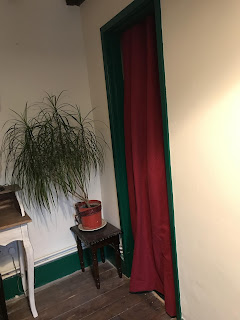 The curtain, now the right size!
Posted by Margot at 09:51