Standing around in cold water

When we went to see this mine for the first time we thought there would be little to it! But we could go back for the second time. We had put some ladders into a winze and now would be bringing even more ladders to bring us even higher. We gathered at the usual spot; Edwyn had brought a pair of ladders. And soon we had them at the bottom of the winze. Edwyn scampered up and we lifted the ladders up to him. And then we watched him try to shimmy them into position. And he managed! And got into a next level. I followed him to the top of the first set of ladders. The level he now was in was dead! It only went some two, three meters. And we could see something around the corner but how to get there? I was wondering if we could bolt a traverse. I had brought bolts and David had a drill.

Edwyn didn't think we could do it, but David wasn't having that. He scampered up, two newish blokes in tow. And then they shouted down they wanted to pull the original set of ladders up. They would need our help bringing them back down again! So we received the emphasised request to not scoot off to the pub. And I suppose it wasn't an empty request! The bottom of the winze was in knee deep water, and to get to it you had to thigh deep water. And it's cold! And just walking through it is OK but of you stand in it for too long you really get cold. After a while those below decided to find a dry spot to sit down. We made sure to still be within earshot. 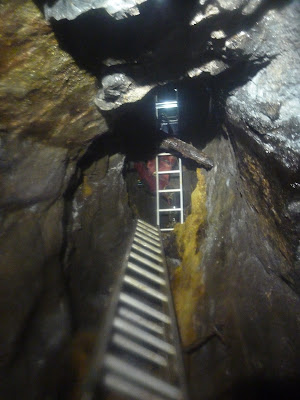 Edwyn faffing with ladders, seen from below

Then a period followed of me sitting down, almost immediately followed by shouts of 'Margot!' coming from the winze. They wanted David's bag. They wanted something that should have been in David's bag but wasn't. And then it got weirder. They wanted to know who had made my bolts. What sort of question is that? They had the bolts in their hands. Any information they wanted to know about it would be documented in the bolts themselves. What did I have to add to this? By then of the four of us below, two had left as they were too cold. It was just me and Chris now. I asked if Chris was willing to do the honneurs next time they called. And he did! And by then they announced their return. I had a nice chat with Chris while the others rounded off their recce.

It took them a while to all come down, especially Edwyn who was taking pictures. They had made it around the corner, using the two ladders! And they had got to a level they hadn't yet fully explored. I was keen to go and have a look for myself! But not now. I was cold and fed up. So we went out! I don't really know how they got down given that David's drill bits weren't big enough for my bolts but well, they clearly found a way. Maybe next week we would get back? A fourth time for a mine we didn't expect much of! 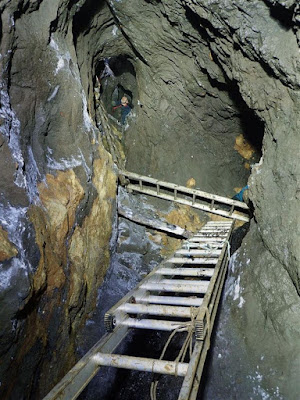 The construction they managed to produce. Pic by Edwyn
Posted by Margot at 10:38