My first graduation ceremony was a winter one! They are not the standard ones. Most students do their last exams in May and then graduate in summer, but MSc students work all through summer too. And then they can graduate in December rather than having to wait until the next summer! And, of course, there might be BSc students who were allowed to submit things late for e.g. medical reasons; if these extensions are too long they can't graduate in summer either. And we have a School of Health Sciences that seems to work on a different time scale from the rest of the university. And PhD students start and finish at fairly random times in the year. So plenty of reasons for winter graduation!

My first graduation had been a winter one. And I had been to a summer episode once too. I was becoming a regular! And the ceremony started at 11 so I didn't bother to go to Menai Bridge first. I would have to pick up the gown well in advance so I went straight to Main Arts from home. I thought I'd pick up the gown, and then read an article in the Council room (where we always meet before the ceremony) until it was time. So I went to the gowns room. I gave my name to a lady who got me a fetching red specimen. She looked at the concomitant hat and said 'ooh I have to check this, it looks very large'. I confirmed that would be on purpose; I need a really large hat. It fit like a glove! The gown gave some trouble; the hood didn't have velcro to keep it in place. If they're not fixed at the front they garrotte you! It did have a loop but the gown didn't have a button to attach it to. And they were designed, of course, on men, who pretty much always wear a buttoned shirt underneath their gown, so they always have something to loop around. But I was in a dress! The lady somewhat flusteredly asked me if I was wearing a bra. I was. She suggested the give me a safety pin so I could fix the hood to that. And I did! Strange times. It did work though.

I then went up to the Council Room but it was locked! I found a chair elsewhere. And then I heard my colleagues Mattias and Ian. We larked about a bit together until someone opened the room. The we larked a bit more. And compared gowns. I always get a different one; as a Dutch academic there is no specific gown I should wear, so I get whatever's left over. And the same holds for Swedes; Mattias, who is one, also always got a surprise gown. My previous gowns had been blue but this time I got a red one.

After a while we lined up, walked in and sat down. The ceremony began. And first the nursing BSc's were called. There were many of them! I think we were stuck on 'Jones' for half an hour. It looks like they recruit locally. But we got through them and finally our BSc's were called. Quite a few! And a bunch of MSc's. But no PhDs this time.

After the ceremony we were ushered outside. It was cold and gusty! I was glad to be wearing a floppy hat; you can pull them over your ears, and then you stay warm and it doesn't blow off. Those in mortar boards were not so lucky. We waited for the SOS students to come out to congratulate them. They were a nice bunch! I had taught many in my climate module. We also took some pics! Then we went back in to give the gowns back. There was a reception afterwards in the management centre. There we could have more of a chat! And could find out how the students liked their new jobs. It sounded good!

I think next summer we will have a big harvest of PhD students! With all those who left and who we miss. It will be nice to see them again! 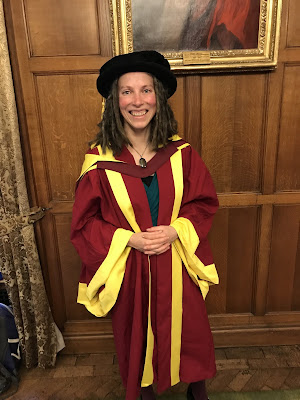 Me in the red gown 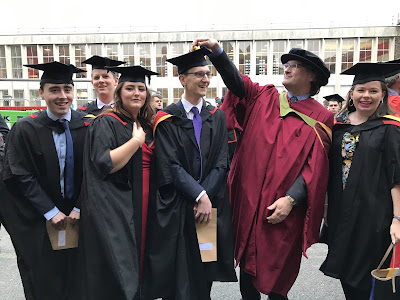 Mattias and some new MSc's. And a rubber duckie (don't ask)