To mid Wales with the YCC

I had sent my lamp back to John, who had made it. He's a Yorkshireman I met through the NYMCC, the sort of brother club of the York Caving Club, of which I was a member. And then soon after he texted me; would I be in the hut near Croesor that weekend? I didn't expect that! And then I realised the YCC/NYMCC always come to North Wales in early December. I had just not been a member of the club anymore so I hadn't been reminded of it. And in early December I tend to be dragging myself in despair to the end of term! But this year I had managed to keep stuff reasonable so I decided I could come visit them. What would they do? John mentioned Hen Gloddfa; I had never even heard of it.

I wondered if I should show up on Friday or Saturday. Or wait until contact had been established! The disadvantage of Friday would be that I would drive in (about 45 minutes), have a chat while everybody else would be getting drunk, and then drive back again. Maybe not such a good idea. Wait until contact had been established? I tried that some years ago and that lead to me not seeing them at all. So maybe just show up on Saturday! I did try to coordinate things a bit; I asked John what the Yorkies would be doing when, but he said they would only decide once there. So I asked him to keep me in the loop, did my usual Friday evening things, and went to bed. But no message in the morning! So after some pootling I decided to just go there with anything I might need in the boot of my car. I drove down, and got there some quarter to ten. And the door was closed but I could see a hand holding a cup of, perhaps, coffee, through a gap in the curtains. There were people awake! So I knocked. And John opened. And there were some unknown faces inside but also several people I had been underground with before. There was Laura who had already been a fixture of the YCC when I started. And David with whom I had been on a rather small trip. And there was Philip, who I had only seen on my very first trip with the YCC! And a shape on the sofa; someone was hungover. Some had been boozing until five! I had been in bed by half past ten...

We would indeed go to Hen Gloddfa, in the Corris area. I had driven past many times (on my way to, or back from, Laugharne), but I had never stopped. Now I would! And I ended up leading the way. I could find Corris Uchaf but from there I didn't remember precisely enough. I knew there was a sharp turn coming up! I saw one, which looked quiet, so I just pulled in. I could look on the map there! But one bloke knew the way so just said 'follow me' and that's what we did. And we parked up at a spot from which you could see slate tips rise up in all directions! The trip had been sold to me as a walk-in, and that walking gear would be advised. I hadn't prepared for that! But I could just go in the clothes I was wearing. I just put on wellies. 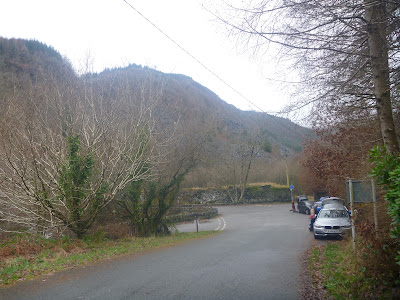 We walked up and found an entrance. But it looked very wet! I was in the only trousers I had with me. Tegs, the Welsh-speaking lady of the club, was wearing her normal clothes too and thought she might want to change. We decided to go back! And then her bloke Jerry followed. We quickly changed into caving suits and returned. The others were just coming out! It didn't go. We walked on. And then up. And we found little. In the end, Tegs found a hole. But by then, four others had scooted off in another direction and we had to wait for them to show them where the hole was. But by the time the others appeared (who hadn't found any other entrances) the first people were already coming out of the hole. Oh well! We went in too. We saw some impressive holes! I knew that in this area, the lodes were vertical, so the chambers were immensely high, but now I saw it for myself. 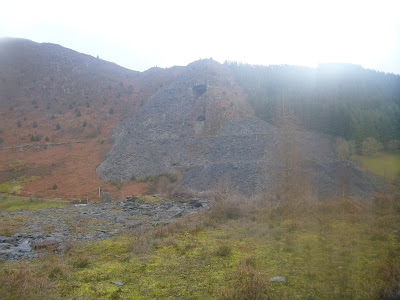 Aberllefenni on the other side of the valley 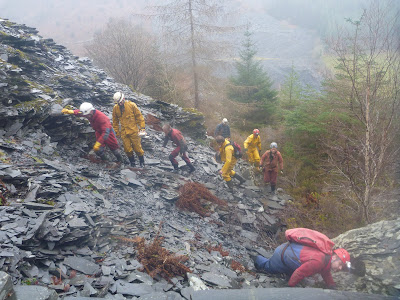 Scampering up the spoil heap, looking for entrances 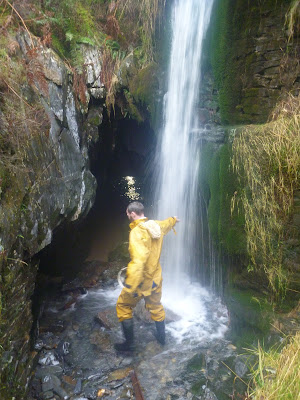 We didn't find anything else. So we went back down! And then decided to go back to the lay-by I had pulled up in; there was another mine there. All the other changed but I didn't. Why would I, when we would do another mine? And my bum wasn't all too dirty so I just drove in all my kit. Driving in steel-toed boots half full of water isn't all that, but I was immediately ready for this next venture.

We walked up the hill. Soon we found a pit. It had some entrances that didn't go anywhere. And then someone spotted a cable on a slightly higher level! We went there. That went! But the people up front said it was too wet. Everybody else had taken their boots off, after all! But I was wet anyway so I went in; I found that Ian (wet anyway as well; he had never put on his caving suit) and Rachel (had changed into her walking gear but had managed to keep her socks dry) were ahead of me. We had a scamper! And we saw it went and went. Surely the others wanted to know that! We went back to tell them. And most did come in then. If Rachel could keep her feet dry, surely the others could too! 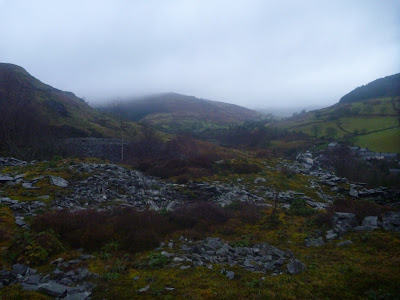 View from the second mine

We went back to where we had turned back and went further down. And further down. A lot of this had steel hand lines, and some pitched had ladders or knotted ropes or the likes! Someone must be using this place commercially.

At some point I was coming past two sets of junctions in a row and figured there must be a lot here. But it was already half past four! And the others had a table booking at seven. And they probably wanted a shower before going for dinner. And we were easily an hour's drive away. So should we keep exploring? And by then it was only me and Ian. We found John back at the second rope from there, and the others at the turning-back point. We went out. And at the cars we found several of the folks who had decided against going in. They had tried to go to a pub! But it turned out to have been a mile up the road, and they had walked down the road.

I now wanted to get out of these wet wellies. So I did! And while I was changing, the other cars left. They hadn't realised I wouldn't come back with them to the hut! Or to the pub of dinner. I wanted to go home. But it was OK! I'm not good with goodbyes anyway. I just drove back. Took me 1.5 hours! And I found a message from Tegs who said goodbye by proxy. And then I cooked my dinner.

That night I had a small look at where we had been; it turned out that the hillside we had started on had two mines, and I wasn't sure to which one the hole we had found belonged to. It could be Hen Gloddfa; it could be Ceunant Ddu. And I got the impression from Aditnow that our attempt at getting in without SRT was misguided. It seems to take a long pitch, and then you see all the treasures! And the second mine was Gaerwen. We probably didn't scratch the surface of that one either.

It had been a bit of a daft day. I don't normally drive that far to do such minimal exploring! But I was mainly in it for the social aspect. And that was good! I should try to remember on time next year that they are coming, and then use my local contacts to find out more about the venues! And try to be so relaxed I feel free again to come with them! Which is hardly something I can take for granted. But it's nice to keep this sort of contact going! And after my recent confrontation with the ThursdayNighters, I was extra glad to be out on a trip with a caving club in which being white may still have been a given, but in which being straight and male most certainly isn't!
Posted by Margot at 08:26