I had been busy baking apple pies this season! One to use up some not-so-good hand apples, and one for a social occasion. But the friend who hosted the social occasion had a lodger, and he was vegan. There was butter and egg in my pie! So he wasn't having it. And I thought that was a waste. And I wondered if I could do a vegan version. I have a vegan colleague who really likes cake, so not only is it a good idea from the angle of animal welfare and carbon emissions to make a vegan pie if doable, but I figured I would find an enthusiast for it. So I gave it a try!

The local supermarket sold a vegan butter equivalent! So that was the butter replaced. I figured I could skip the shiny layer on the dough latticework; that's only decorative. But I wondered if I could use something to replace the egg in the filling, which tries, and fails, to stick the apple together. And I wondered if maybe jam would do the job. Finding vegan jam is a doddle. So I tried! I had some blackberry jam and I plonked that in. I only made a pie half the size as the previous one as it was an experiment. I forgot a bit about surface area to volume ratio and ended up with too little dough for a full latticework. Oh well. Better next time.

It came out and it looked good! I cut it and it did what apple pie tends to do: it collapsed in a heap. Oh well. It tasted good! A lot better than my previous attempt at vegan pie. I mailed my vegan colleague! And let the cake cool.

To my pleasant surprise, when it was cool it was actually quite coherent! Better than the non-vegan one. That jam trick works! I'll do this again. The apple tree has a lot more to offer and pie is great for variety on just eating them like that. And now I can do it more sustainably! 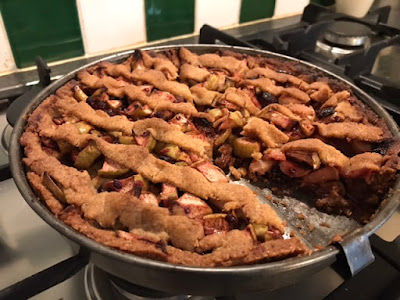