The Oxford English Dictionary suggests you are middle-aged from 45 on! So I have two more months. But the OED only suggests, and I personally think I'm there already! I have reading glasses! I had started to notice I couldn't focus anymore on things close to my nose. And trying other people's reading glasses showed me how comfortable they are. You can just see things! So I figured it was time to get me a pair. I know you can just by them cheap in the supermarket but I thought I may better get my eyes tested. It' d been a while!

One Saturday I popped to Bangor to get tested. My distance glasses were still fine, which I expected, and the optician said I had just entered the lowest region in which reading glasses make sense. So I wanted a pair! And picked a frame. And booked an appointment to come to get them.

Two weeks later I did. So now I am middle-aged! I knew it was about to happen. My two sisters are only marginally older than me and they already had them. I was bound to follow! And now I can see small writing again. Comfortably. And when I posted the picture below on Facebook, my Finnish sister immediately posted a picture of her with her pair: they were almost identical! I liked that. I had seen her reading glasses, of course, but hadn't thought of them when I picked my frame. But we look fairly similar so it's not strange that what looks good on her looks good on me! And she has much better taste, so picking something similar feels like a triumph.

And what's next? I suppose I'll manage like this all the way until I need my glasses too often, and then go varifocal! That's central middle age. I'm still only in early middle age... 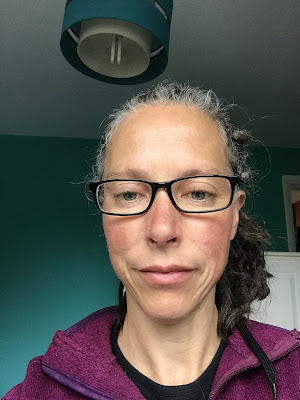