More struggles with the heating

I've been wondering about my heating for a while. I figured my thermostat wasn't very good. It would give me rather random temperatures! And I tried to find out if I could just buy another one. But I struggled to find out how much of an issue that would be. I asked a friend whose brother is a plumber, and I googled my head off, but I just didn't manage to find out if my boiler would just communicate with a different thermostat if I would buy one. So I kicked the whole issue into the long grass. And in spring, I switched it all off. And didn't think much more of it.

Then it became autumn and heating became relevant again. Especially as I spend a lot of time at home, and to make it worse, I sit still a lot! And you don't want that in too cold a room. But when I switched the heating on again, it wouldn't work. The boiler said the thermostat didn't have enough battery power. So I changed the batteries. And nothing changed. Then, to be sure, I bought a brand new pair of batteries. Still nothing. I tried what I could think of; I pressed all the buttons of the boiler (including the 'off' button). And after the Nth button press suddenly the heating came on. And on. And on! It became warm soon. And I had the thermostat at 10 degrees. And brought it down to 5. But the heating was on full blast. Bad idea! I don't want it hot in my house. I switched it off again.

It was time to contact my plumber. He said I indeed needed a new thermostat! And by then I had found a Youtube video where a man shows how you connect the very thermostat I had to the very boiler. Not to be taken for granted: the boiler is discontinued. So I had faith I would manage to pair them up! So I ordered the same thing again. Talk to people who know about plumbing and they will try to convince you to have weird modern systems with which you can control the individual radiators from your phone. Too much for me! Give me a mechanical device. Less that can go wrong.

It will be important to have working heating over this winter! And it should also be able to work at modest heat. I don't like my house too warm, and I like the thought of all the emissions from this unwanted heat even less. I hope I can fix this! 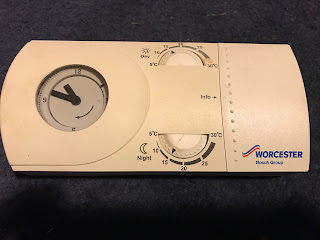