Winter walk with the undergroundies

When I visited Phil after my house hunting activities he mentioned he wanted to go for a walk with Chris to have a look at some plane wrecks in Cwm Eigiau. That sounded lovely! And I like that valley. Had only been there twice; the first time during marathon training and the second time on a swamp hike. And I don't have strong feelings about plane wrecks but I don't mind them either. And a walk in good company is better than a walk alone! And the weather forecast for Sunday was lovely.

Phil had mailed me we'd meet at the Pedol pub in Tal-y-Bont at 9, and from there drive to the parking lot in the valley. I would drive up with Edwyn but early in the morning he mailed he was ill. Oh dear! I drove to the Pedol on my own. Nobody there! But Phil had said he might be a bit late.

When he still wasn't there at 9.25 I started phoning and texting. After a while I managed to get through to Mick. They had gone to the parking lot already! Bastards! I had been sitting there for 25 minutes wasting my time. Nothing winds me up like wasting time. I drove up and got there. I got out and told every one of the three men there I hated them. But then we started walking. No use dwelling on it!

It was a beautiful day! We started walking up to the dam, and its breach. (It wasn't built very well and gave in the twenties, killing lots of people.) That just stays impressive. Then we went on. We had a look at the first quarry. It had a rock cannon! I had never heard of that; it seems to be a typically North Welsh thing. And from the name you wouldn't guess it's more a musical instrument than a weapon. (The Wikipedia page doesn't mention it seems they drilled the pattern in such a way the various bangs played a crude tune). 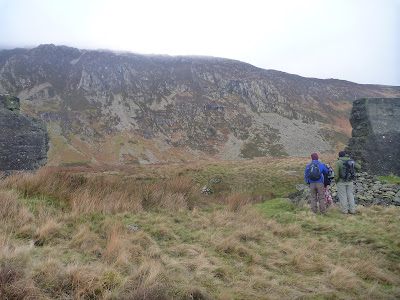 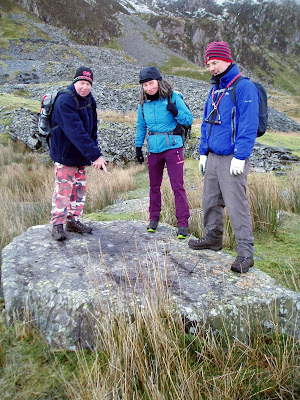 The rock cannon; pic by Chris 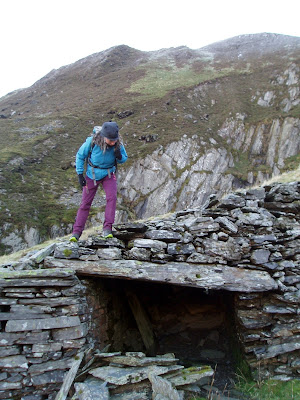 Looking at a collapsed passage under an incline. Pic by Chris

Past the second quarry (at some distance) we proceeded to the head of the valley. Along the way we had coffee on a rock. Around the corner, the Carneddau were looking beautiful in white! Especially in the sun! We soon found the first airplane engine. And then the second! There were supposed to be more bits on the slope above. We found two. The we walked on; Phil was ahead (surprise) and where he stopped would be lunch. 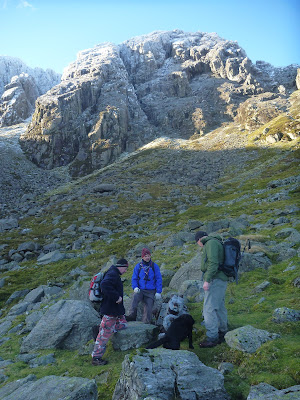 After lunch we walked on. The views on the wintery higher valley were getting better and better! But the men were a bit distracted; in the stream there were lots of bits of yet another plane. Soon after admiring these we walked around the corner, into the shadow. It got cold! We walked into the wind too. We got up to Llyn Llyffant, to admire the last plane bits. and then started our way back. Chris wanted to walk a different way back, along the isolines on the western side of the valley, so we could pick up the path that came from Dulyn Reservoir. That started fine but we did encounter some unpleasantly swampy bits. Oh well! I was wearing my rather swamp-proof boots. 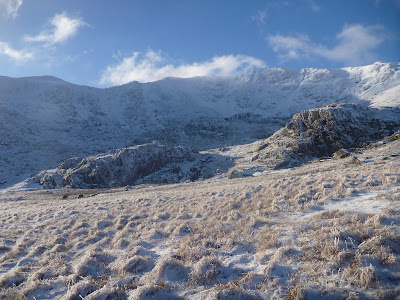 The landscape gets wintery 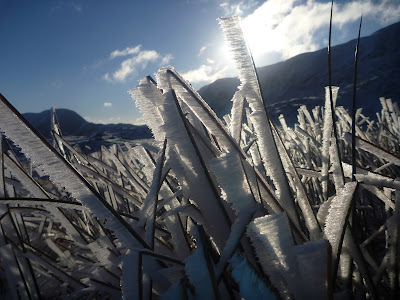 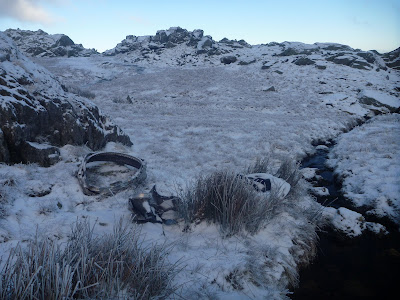 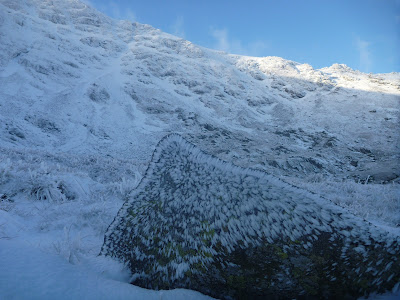 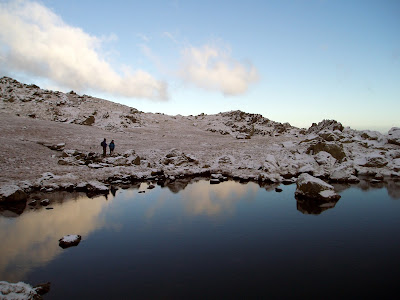 At the lake. Here Phil is lecturing me about jet engines. Pic by Chris

We were back a bit after four. The sky was already pink! There was some faffing (changing, eating, drinking, defrosting windscreens) and then we were off, down the sometimes very steep road back to Tal-y-Bont. And it was scary! There was ice on the road. I was behind Phil, and at some point I was sliding quite out of control in his direction. He was on equally slippery ground though, so he moved at a similar speed away from me, and nothing unpleasant happened. But I was scared! We went really carefully further down. No further incidents followed. Luckily!

When I got home I was tired. But it had been a very beautiful day!
Posted by Margot at 08:50