When I knew I would not have to spend my weekends writing job application letters or preparing for interviews, I figured I could join the YCC for my last weekend away with them before I would leave York. And I may well enjoy more weekends with them; if they travel west for a weekend underground I can just drive in the opposite direction and end up at the same place. But it's different from a distance! So I was glad to make it.

On Valentine's day I rattled the Laura's letterbox. I was going to pick her up and drive us to the Dales, where we would stay in a cavers' hut near Ingleton. There was no response. I knocked. I rang. I texted. And gave up and sat in the car, listening to "the News Quiz" in the car until she would notice me.

From the moment she did all went smoothly. She TomTommed me skillfully to our destination, and while we were unloading, Gary's car, which held Gary, Matt and David, appeared too and we were complete. The weekend could begin! And for the first night, that basically just involved drinking beer and socialising. The Saturday was for caving.

And Saturday came. We jumped into the two cars, drove to Clapham, and walked the 45 minute walk to the entrance of Marilyn, the cave of choice for the day. Not the most spectacular Dales venue, but one that is still accessible when half the country is in flood, which is currently was. We kitted up at the entrance and in we went.

I started out having my bag on the wrong side of the rope. I always do that! The second pitch I struggled too; it was very, very narrow; one of those pitches where you rub against the stone on literally all sides. Not a trip for the PCG with its slightly higher average BMI! The next pitch was even worse; I hung myself from my stop, but found out the hard way that loop in the rope was too short for that. And try to get yourself out of a stop when the rope is at tension! This was my clumsy day. But I got down safely.

Once down I was cornered by two of the more senior YCC members. They had noticed something in the air between me and one of the CMHS chaps. What was going on there? I announced an imminent first date. That seems a satisfying answer, and with that we moved into a rift. I hate rifts! They never fail to scare me. But this one was rather innocuous and we came to its end without issues. A streamway followed, and then a short crawl through water. We hesitated at that one; would a crawl like that really be a good idea in wet times like these? But we did it. And were rewarded by another streamway with a drop along a waterfall, and then a view on the last drop. We left that pitch be; it had a waterfall of its own, and not a trivial one; it was so much more powerful than would be comfortable that day. We went back. 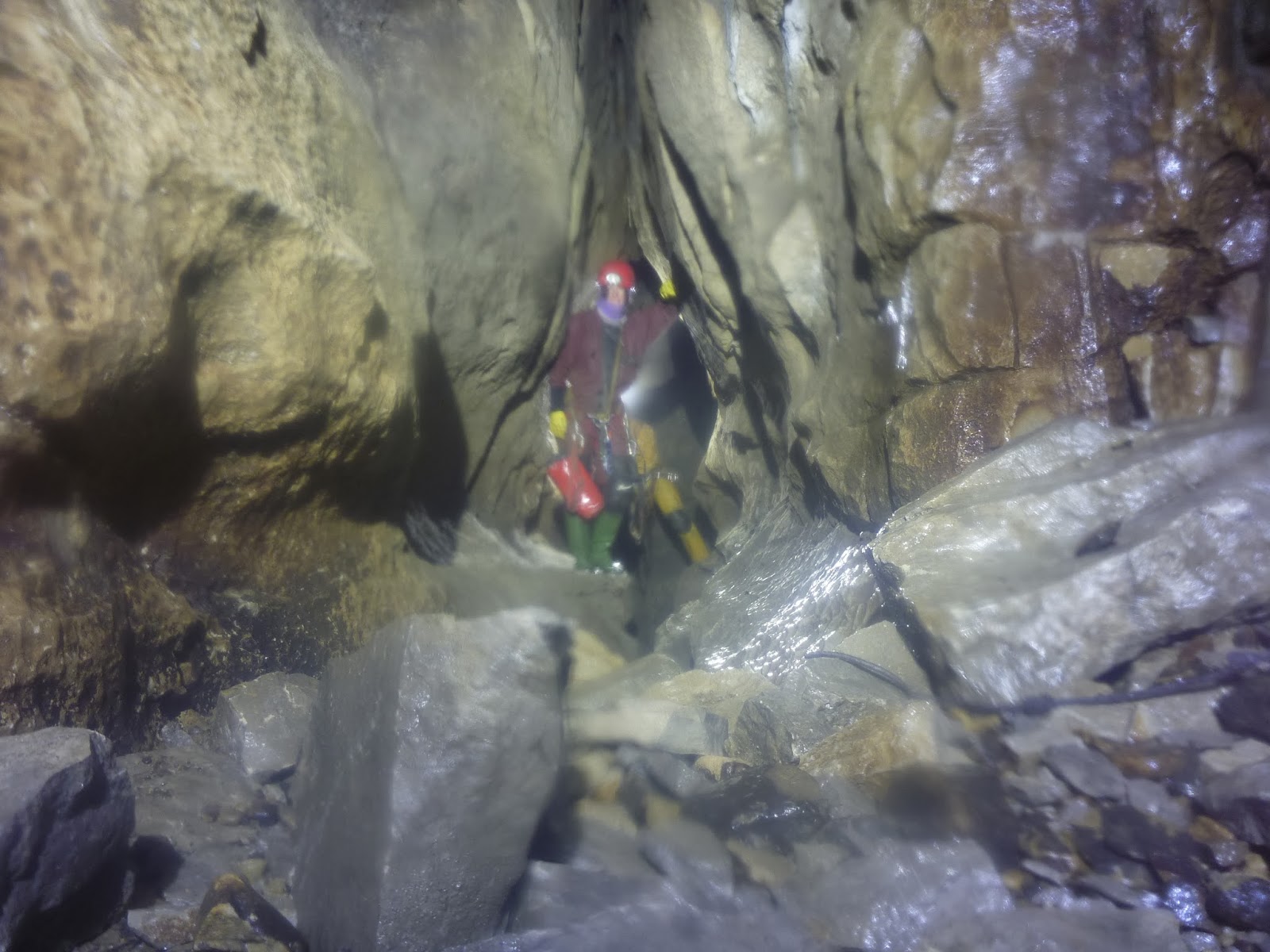 A not very good pic of the first rift

Without incident I came to the last pitch. I happened to be the first one. I climbed up and came to the gate on top. I balanced on a scaffolding pole and a protruding rock. And tried to lift the gate. And failed! Oh dear. I tried a few times more. Man that thing is heavy. I decided to admit defeat. I secured myself on the rope that went to a peg outside the shaft, and called to Laura to join me. And together we managed to open the gate and climb out. Dear me I need to work on my upper body strength.

When we were out the men followed. We told them the view was amazing; it was sunny, and we had a view on snowy hills, which, due to fog, had not been the case when we came in! They thought we were bullshitting them. Every man was announced by steam billowing out of the shaft (we exclusively cave with hot men), followed by sounds of disbelief when they saw they indeed came out into the sunshine. 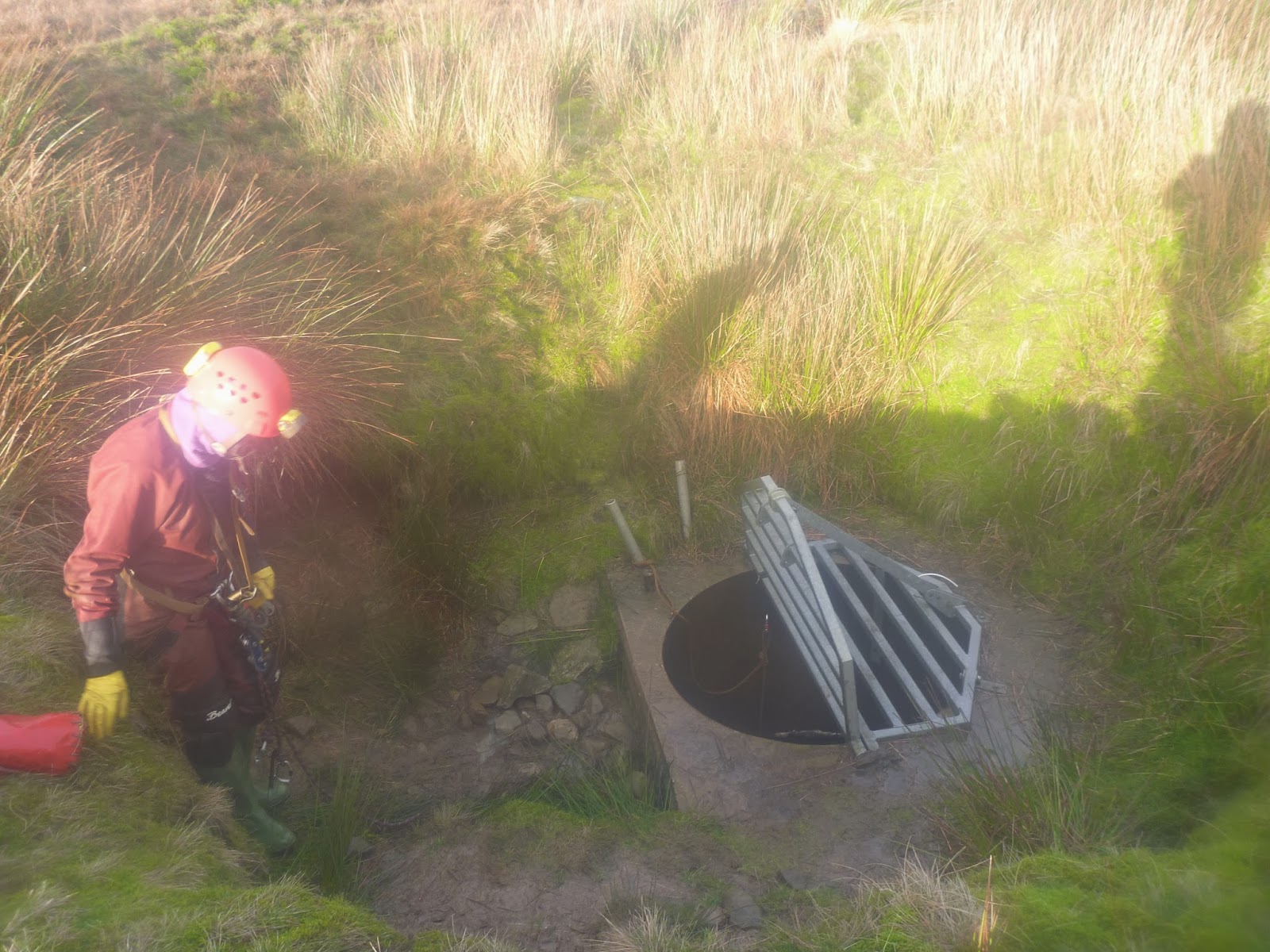 The entrance with its heavy gate 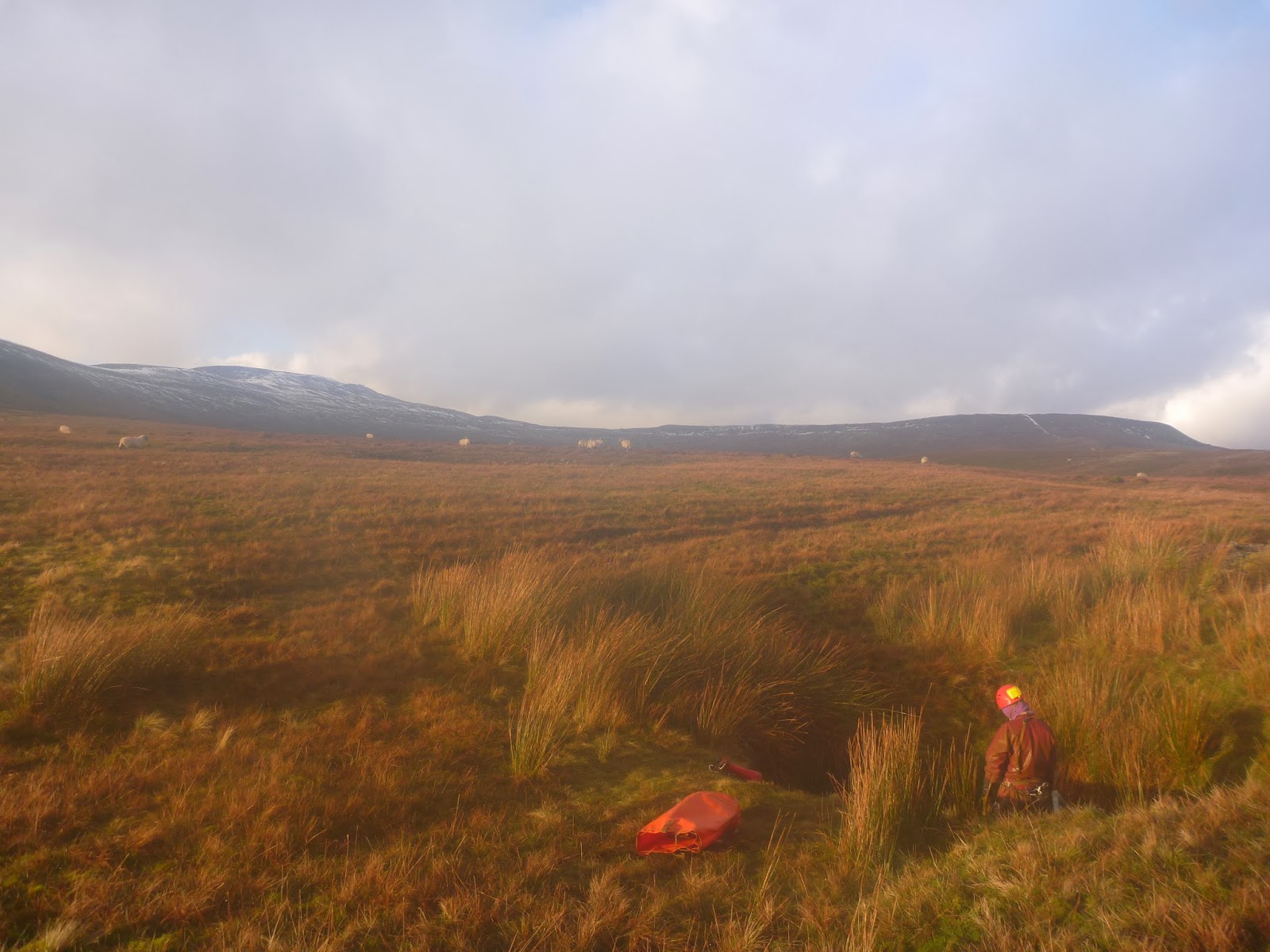 Snow on the hills in the background

We walked back through the beautiful landscape. This had been quite a brief trip, but that was OK; I clearly wasn't in the right mindset for anything very demanding. And drinking beer with the others, and eating pita bread with Matt-made hummus was quite my idea of a good time!