A good headlight is very important underground. In the southwest I managed quite well with an old club lamp. But then I moved to York and joined the YCC. That meant stepping up my game! During the first trip I did with them I usedfour sets of batteries if I remember correctly. That means having to stop three times to change them! And when we got out I didn't have much battery power to spare. It was time for an upgrade.

I asked around what light came highly recommended. The answer was: a Petzl with upgrade. I tried it. I wasn't impressed. Then I asked again. People pointed at one of the Johns of NYMCC who makes lamps himself. He's not cheap but he's good! He said he was just making a new batch. He'd get it done before I left the county. But then April came and I moved. He let me borrow an older prototype.

The new, borrowed light was just what I wanted. It lasted forever on a battery pack and it was a bright as you could want it to be. And it was bomb proof. I need my electronics to be hardy! So I was happy. And just waiting for the finished product.

Over one and a half years went by. Nothing. Then the YCC/NYMCC came to Wales again. Including John. And including the new light! I was excited! It's no use when not attached to a helmet, though, so I didn't get to try the new light out. And as soon as I was home I got a message from John: if I could send it back so he could improve it even more. How long would that last? But it was only a few weeks, including Christmas. It was sent to me by Tuesday the 5th, but I wasn't home. I collected it from the Royal Mail depot on the 6th. That evening I mounted it on my helmet. So on our Thursday trip on January the 7th I could try it out! Finally! And I may only have a year of caving ahead of me as nobody knows where I'll find  a next job, but in a way, I've already had some 18 months of amazing use of this lamp, through its brother. I'm sorted! 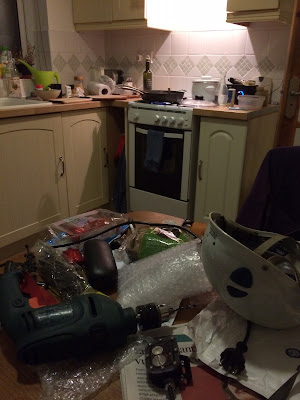 I mounted the lamp Margot style: while simultaneously cooking. 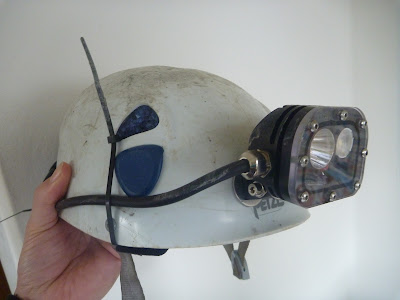