The PCG was coming to Wales again! The people I started my underground career with. Big Dave sent me a message. And it would be the weekend after Welcome Week. So I would be able to go out with them for a bit!

Welcome Week kept me busy so I didn't phone Dave until I was home on Friday and dinner was underway. And they had done Aberllyn that day! A wise choice. On Sunday they would do Milwr Tunnel. I didn't want to join! It's a long trip. It's more than an hour away, and it's a long trip, especially with slow people. And I'm afraid Dave is one! So that left Saturday. And the forecast for that day was great. I figured what we needed was something he hadn't done yet, that wasn't too much of a walk to get to, that was quite small so we wouldn't spend too much time underground while the weather was great, and that was pleasant to be near in great weather. So I went with Seler Ddu. I had to think quick!

I said I would be at the hut they had rented at 10. And all should be well. Except that I had sort of forgot to check where the hut was. And where the mine was. And where my kit was. I ended up on an uncomfortable road I thought I remembered the driveway to the hut was, all confused. But there was internet signal there and I just googled the place. Wrong road, oops! I texted Dave to say I would be late and drove to where I was supposed to be.

When I got there they were still complete! It wasn't a big delegation. It was good to see them! We had Big Dave, Even Bigger Dave, Richard, Laura and Fran. Dave would drop off Richard and Laura who would walk Tryfan and Glyder Fawr, go visit Penrhyn Castle, and then pick them up on the other side. I would get Big Dave and Fran. And we got into Dave's car and set off.

When we got there Dave was worried I would make him walk up a hill. And I did! But not a big one. And while I packed my bag I realised I had forgot my gloves and my helmet. My head really wasn't with it this day! But Fran lent me a head torch and Dave lent me some gloves. And we said hello to two Germans who were on a walk. The bloke was barefoot! 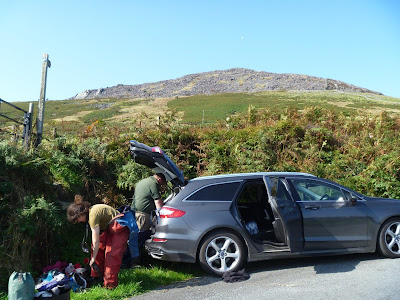 When we had either walked or dragged ourselves up to the entrance that leads to the little waterfall Dave was knackered. So we first had a breather in the sun! And then we went in. Then we did another breather (Dave was not at his best) and then proceeded to the main entrance. There we had yet another breather! 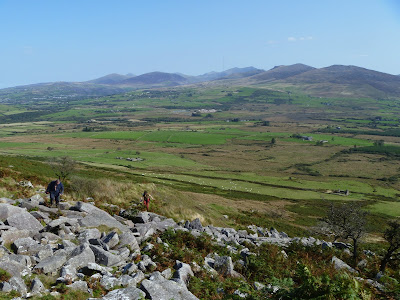 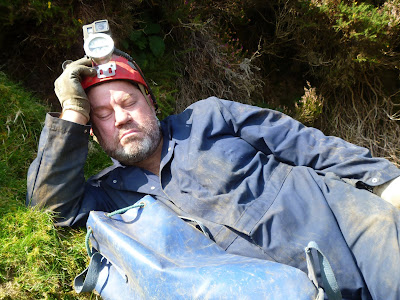 Dave having a snooze

Finally we went in. And had a look around. They liked the pickaxe marks! But it's not a big place, so we were out fairly early. And then, you guessed it, had another breather! But I was keen to hop to the top of the hill. It looked beautiful! And Dave was probably quite fine having another snooze.

Fran went with me. We walked up and beautiful it was indeed! What a place, such views. But Dave was waiting so we quite soon came down again. 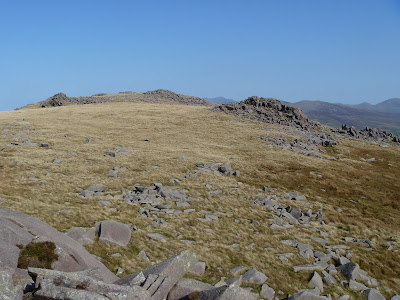 View from the top to the east 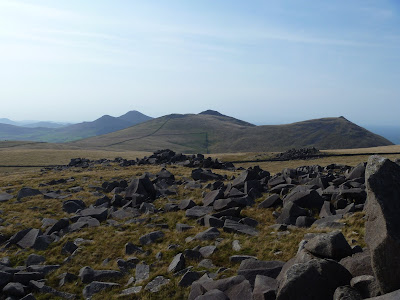 We walked back down, and came across our Germans again. They were fascinated with the mine and we showed them where the entrances were. They lived nearby; maybe they'll go and explore one day! Then we continued down, changed, and got into the car. While we drove back I had an idea. We could drive back through the Nantlle Valley! I could point out the entrances to Benallt, Simdde Tylluan and Drws y Coed. And so we did. Bu then it was time to proceed to the hut. We drove the scenic route; via Pen y Pass. And when we drove past the lay-by near Llanberis Copper Mine we saw a man sitting on a bench. It looked like Dave! So Big Dave made a U-turn where he could and we drove back. And it was him! He was waiting for Laura and Rich. And Rich had left his phone. We used it to phone Laura (after figuring out how it works; I came in handy there! i have the same model) and they turned out to be really close. So we left them to it and went back to the hut.

There we had some tea. And a slice of cake made by Dave's wife! But that spelled the end of my visit. I gave Dave a hug and drove back. I was glad I didn't bump into Dave coming back, as the driveway has no passing places. And now I drove home the sensible way.

It was good to see them! And Dave said next year they wanted to come a bit earlier in the year. That might mean during Laugharne, or maybe during Welcome Week. Or before all that! Maybe that would be better! And I'll have to think of a list of places to go!
Posted by Margot at 06:56