Phil the Joiner had said he'd just put one door in and then see how I liked it and how much he'd charge for the others. So I had no idea when he would actually finish it! But the first door came in on a Wednesday. On the Thursday he had done the master bedroom and the bathroom too. And on Friday he had done the upstairs doors. He was going like the clappers! On Saturday we spoke on the phone and he said he would do the last two on Monday. So in only six days it will all have been done! And when I say 'all' I mean 'all the physical hanging of the doors'. I have been running after the joiner, touching up the paint on the affected door frames. With mixed results! In spite of me taping the hinges I got paint on every single one of them so far. I blame the uneven surfaces that the tape struggles to evenly adhere to. I only managed to get it off again if it had been white paint spilled. The green is still there! Oh well. And I haven't done the upstairs doors yet, or the doors in varnished frames as I still have to go and buy some varnish.

I'm happy with my doors, paint on the hinges or not! And they look gorgeous in the old part of the house and gorgeous but slightly out of place in the extension. And now I can close all doors! Which can be quite nice. A big step in the doing up of the house is taken! 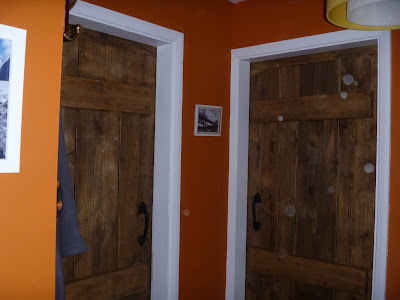 The bedroom and bathroom are done too now! 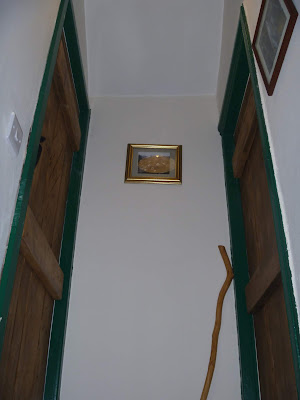 The doors on the top floor 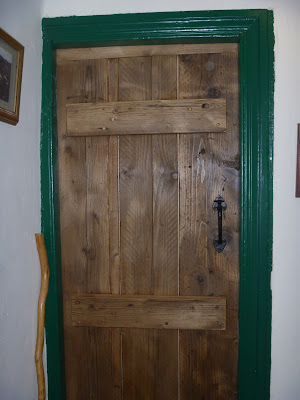 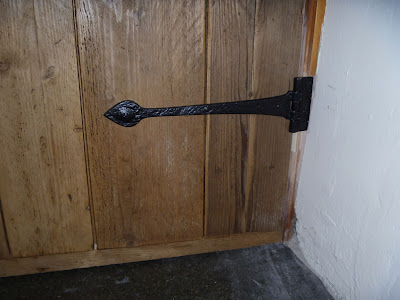 How the joiner managed with the narrow door frame at the bottom of the kitchen door; just dig into the wall!