It started on Friday! I was fresh back from Laugharne, and I would meet the Peer Guides at one O'clock. And when I did they all seemed rather ready. Whether the system was too was another matter! But that is explained elsewhere. And then over the weekend things were quiet. I did get emails about one student who wanted another peer guide! And that was fairly easily sorted. And that was mostly it.

Then it was Monday. And then all freshers would come to SOS. And there were more than 200 of them! They didn't all show up but still, the lab was absolutely packed. They would be welcomed by the Head of School and by me, would be given a safety briefing by the University's Health and Safety officer, and an explanation of the possibilities regarding being taught in Welsh. And then they would meet their personal tutors. And then central services would do a presentation. And then the students would go back to Bangor!

It was interesting to see busload after busload of students walk in. But we managed to fit them all! And things went well. Until there was a drinks-and-brownie break. And that resulted in an enormous queue! We need to think of a way of doing that better if we ever have such student numbers. 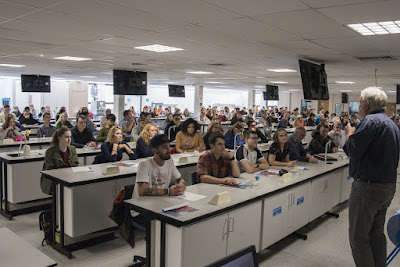 The Head of School welcomes the freshers

I got to meet my group. As usual, there were some introverts and some extroverts. It's always difficult to make sure the latter don't drown out the former. We'll see how I manage! But it seemed to be a nice group. Even though I only had seven out of nine.

I chaired the entire thing, and did my half hour welcome talk, and in between tried to field questions from both freshers and peer guides. I was an obvious person to go to! But it was hectic. And when they all left we had a huge lab to put back into its normal state. We had had to bring in all chairs from one of the MSc labs! And now these had to go back. When that was done I was knackered and very thirsty. At least I didn't have to do any such things the day after.

On Wednesday we had a coffee morning but I had accidentally booked a dentist's appointment straight over it. So Suzie took over from me! As thanks for me making her a core log. That was really nice of her! But some issues came to the fore (I won't go into detail) that meant we had to do quite some firefighting in the afternoon.

On Thursday we had the traditional beach trip. Last year it had been cancelled due to a wind warning but this time the weather was amazing. So it was a bit dull (I'm not sure we need staff there) but dull in the most delightful way! The peer guides had it all under control, it's a beautiful beach, especially on a day like that. The freshers made sand castles, tried to fill PVC pipes with water in spite of them having holes in, and did tug of war. And then time was up! 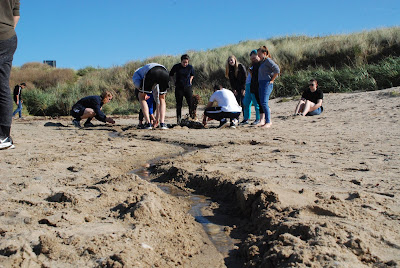 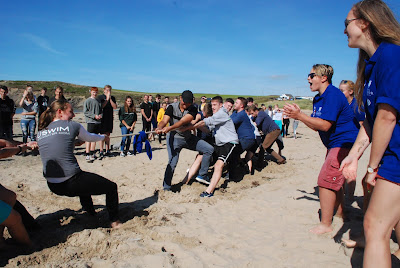 In the first week of term we will have a debrief. And then we'll see what they all think of it! But so far I'm quite chuffed with how it all went. All thanks to the peer guides! Where would we be without them. And ok also thanks to the School's secretary as she booked the rooms and the buses and whatnot. But the peer guides ran the show and they ran it well!
Posted by Margot at 08:03