Laugharne: the end (for me)

I had driven up on Saturday. By Wednesday I could finally do what I had come for! And I had no problem at all at making myself useful as a general person, just talking about the environment, talking about sediment and helping surveying, but doing your own thing just is something different.

In the olden days I had taken samples with the students,  processed them, dried them, picked them, and identified the forams. I then collated the assemblages and gave them back to the students so they could do a proper palaeo-environmental reconstruction with it. But now that it all had to go fast I would just walk them into the field, talk a bit, and then show them artificial samples. They would have to identify the species, and then figure out which environment the samples came from. I was wondering how it would work! 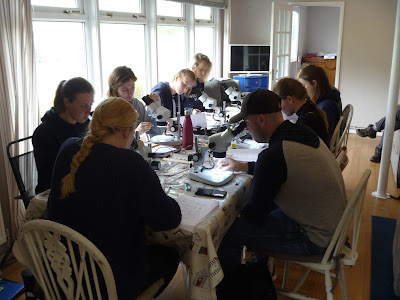 I had enough microscopes for all students. It was a bit cramped though; the table wasn't overly big. And the room the table was in wasn't either. But we made do! When I came out of the field with the students, Suzie had already set up the microscopes, so I could have a flying start. And as usual, some students took to it a lot more than others. Slowly they identified their forams. And thereby their environments! And it worked well!

I had let them gather at 9. We were in the lab by 10.30 or so. And they were done at about 1! I then put the microscopes and accoutrements away, sorted one slide that had been badly glued and lost some forams, and then gave in to my ravenousness and had lunch. Finally!

I did some more computer work while my lunch settled. And when it had settled I went for a nice run. The access path to the coastal path had been strimmed, so I used it to avoid the main road. During earlier versions of the fieldwork I had had to struggle through the brambles and nettles and whatnot and for some reason, all marks left by hostile plants would swell up so much all swellings would grow together and made my legs go all unpleasant. But that was over now! Great! 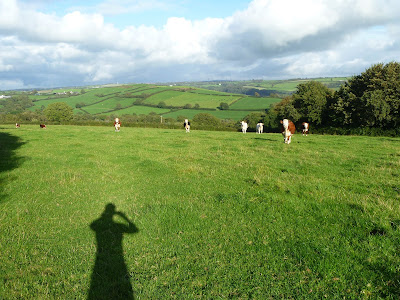 Curious cattle on my run

The next day I did the same. Both days I had to go into the field with the minibus, which I am not authorised to drive, so I had Stef the lab technician with me. That's always nice! The second day was quite wet so I got back a bit soaking but well, I'm not made of sugar. And this time Stef and I had to set up the microscopes ourselves. Stef can help students with their microscope set-up but not with foram identification. So as soon as they were all set up I was busy! I had one student fewer that day though. And this lot was even more switched on than the previous bunch. One student identified some four environments! And by about one they were done too. But this time, I would leave as soon as I could. So I packed the microscopes away, replaced a crushed foram, and then had lunch again; this would be my hot meal of the day (there were lovely leftovers). And then I did things such as clean the kitchen, empty the bin, pack my stuff, clean my bedroom, help Suzie pack away other equipment we did not need anymore, made sandwiches for in the car (also for Dei) and such things. And did some reading!

At around five Dei appeared. He first had to sort something scientific out. Then he went up to pack. When he was done we could go! So I made sure I said goodbye to David who was doing things with the drone in the chalet. And when Dei appeared I said goodbye to the others too! And off we were.

I drove to Aberystwyth. There Dei took over. He drove the rest! And then we were back in the north. It had been an abrupt end to the fieldtrip. I actually hope I can be there until the end next time! And I think my approach works. But let's see how the students do in the final assignment, and what feedback will be...
Posted by Margot at 09:27