This would be a strange Laugharne! But a nice one too. I figured. I had to pack during the busy get-everything-ready-for-Laugharne, Welcome Week and the new semester week. And on Saturday morning we would leave! No weekend for me. I drove up to Menai Bridge, had a last toilet visit, and was assigned a nine-seater to transport students in. Soon I had all my seats filled and was on my way!

The drive down was uneventful. As it should be! We unloaded the students, and then unloaded the van that had come separately with all the gear. Then we had a briefing with the students! We were hitting the ground running. Then we made plans for the next day: who would say what on our tour? What time should we start, what time did we have to be back to send four or five students off on a boat to do measurement on conductivity, temperature, and depth (CTD) in the estuary? And such!

That evening we had pasta made my Martin. It was lovely! But as many Laugharne meals, it was good, too much and rather late. After dinner I quite soon headed off to bed. First day done!

The next day it was lovely weather. I was a bit iffy in the head! I had had an entire pint of lager with dinner and it was a bit much. I am such a lightweight! But nevermind, we crammed everybody into two vehicles and set off. We had three stops: a bridge over the river Taf where we took a sediment sample, a walk to a hilltop above Pendine from which we could see the back-barrier system a lot of the field trip is all about, and a walk to a hilltop juts outside Laugharne itself from which we could see the estuary, which the rest of the field trip is all about. We had a nice agreement in which I would talk about old stuff and Suzie and Martin would talk about newer things. It worked well! Then we stopped for lunch in Laugharne proper. I just ate my left-over sarnies. Then all we had to do was do one change-over of students doing CTD, and then we were ready to take everybody to the supermarket. And this time it was my turn to cook!

I made my own version of Indonesian Fried Rice (with prawn crackers and pisang goreng!) and it went down well. And I dared a half pint. But the day wasn't over yet: I had some studying to do for the next day, when we would go into the field either as sedimentologists (Martin) or pretending to be that (Suzie and me). I think I was done at a quarter past ten! Bedtime. Second day done! And then the next day we would get up close and personal with the estuary... 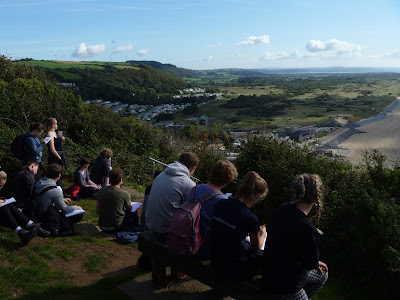 Looking out over Pendine and the back-barrier system
Posted by Margot at 09:05