If you have a part of a mine that keeps dropping bits on your head you can put a tube in! That solves the problem. Or if you can't access a mine the usual way but have to dig a new entrance, a tube can keep your entrance from collapsing, as you're probably digging through unconsolidated ground. We'd done that on the North York Moors! And I know Miles and his people had put a tube into a collapse-prone part of the smoke flue, although I haven't seen that myself. So when I saw a piece of tube on the Bethesda rugby field I bike past on a regular basis my interest was raised. It looked like rubbish! We would have a use for it. So after some discussion with David I decided to see if I could have it. On a Saturday I wondered up to the rugby club, but there was noone there. Then I biked past on my commute one evening and saw there was a game on. I popped by!

The barman was a bit surprised but he had no issues with my request. He said that thing had been lingering on the field for some two years. If I had a use for it I could take it! So I walked up to it and rolled it home. That turned some heads. But it's not far and I put it safely into my garage! Not sure where it'll go; the old ThursdayNighter dig has a good spot for it but we wouldn't be able to get the big piece of plastic there. We have another project in Wrysgan but I'm not sure a tube would add to it. As it stands, 'the' dig wouldn't have a use for it. But we'll find something! 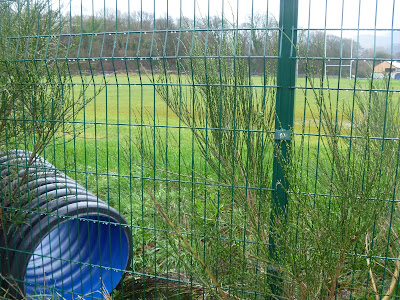 Finding a tube on a rugby field; spot the pavilion in the distance 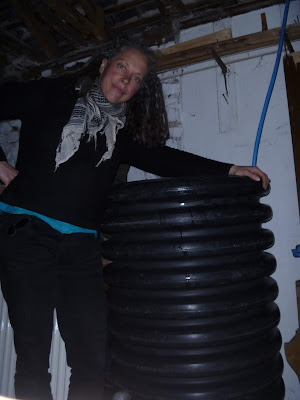