I had been on a walk with Monique before! But now we could go from the front door. That's lovely! And we decided to go into the valley with the leat above it. I had walked there before, but that had been over two years ago! And it looked different now, as it was spring. We would just see how far we would go!

I lost the path trying to cross the valley made by Afon Ffrydlas. I seem to do that about 50% of the time! But we managed. And soon we were at the pretty sheepfold in the saddle of the ridge. And then the valley on the other side opened up! It was beautiful. It was a bit of a cold day with a stiff wind but the sun was shining! And showed no sign of stopping that. 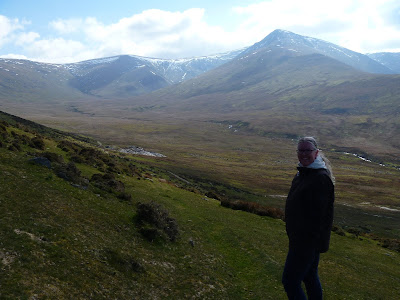 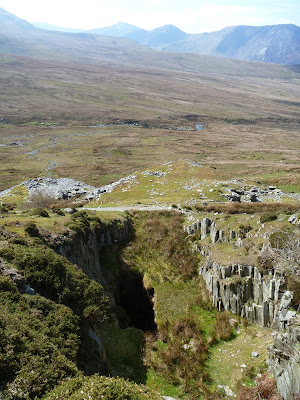 When we walked along the little quarry I saw a raven fly up. And then I spotted the nest! With two baby ravens. Cute.

We walked on and when we reached the sheep fold, we stopped for lunch. That was nice! We just looked at the various horses around on the hillside. And then we went on. The official path stopped but there was still something we could follow. We decided to call it a day at a tiny little sheep fold (which looked like the ruins of a house from a distance) and turn back.

We walked the direct route back. We had walked out via Tan-y-Foel as that's the quickest way of getting out of town. But we didn't mind a bit of town on the way back. That would even allow us to do some food shopping! It was a relaxed scamper back. Monique isn't used to long walks, especially not on hills, and there was no reason to complicate things!


We managed a bit of sitting outside in the sun and then we did our usual evening routine. And the next day we would only have half! Monique didn't want another walk so we opted for the National Slate Museum. That's always nice! But when I asked her to help me drive the scenic route there she wondered why I wouldn't drive over Bus Stop Quarry. Then she saw there is a path down there to the museum, but not a way for cars to go. And then she suggested we just park up and walk the rest. That's 200m down! And then back up again. Who had said she didn't want a walk? But we went with it! And it went well.

We saw the intro film, and the slate splitting. Then we visited the cottages (the one from 1901 Bethesda got my undivided attention, as you can imagine) and went for a bowl of soup. And then it was time to walk back up the hill! And that went well. No aching muscles protested enough to get in the way! And we even had some time to spare. I suggested we walk into the quarry (it's not far from where the car was parked) and drink a cup of tea there. So we did! But then our time was coming to an end. 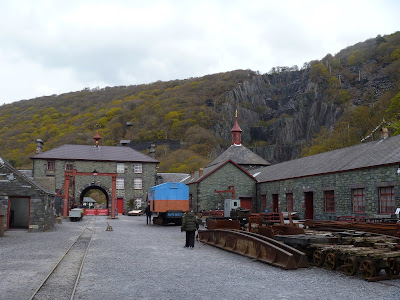 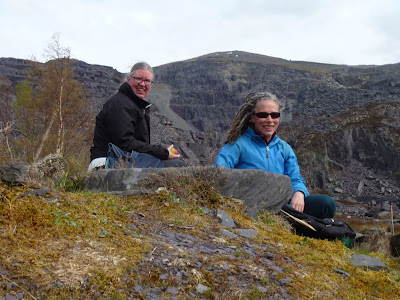 I drove us to the railway station. Monique commented on that she had thought in advance this would be a long stay! It wasn't. It flew by! But she was already talking about coming back. And what we'd do then!