I had put up curtains when my bedroom had carpet. But they were just normal curtains. And this bedroom faces roughly south. It's important to keep the sun out properly! I started noticing the sun peeped past the curtains just before the clocks changed. It got light early! So I decided I needed another layer. In the previous house, I had an extra layer of blackout material underneath the curtain. Closer to the glass, so less chance of light getting past. That worked a treat! And I still had that piece of cloth. Could that save me?

I got a break as then daylight saving time kicked in, and it suddenly wasn't light just that early. I took that time to act! I measured the window in the door, and the actual window next to it, and I saw my old piece of blackout was big enough for both. So I cut it in two! And improvised hems with pins. And just hung them, from pieces of string, in the window/door frame. It's not overly pretty (but you won't see that, as it only makes sense to have them closed when the traditional curtains are closed too), and it's rather preliminary, but it will do for now. I think I'll leave it like this until I have solved my sewing machine issues. I have figured out there are repair services in the vicinity; I need to find out if my machine can be repaired, and if not, I should probably get another one. A simple one. This is just long stretches of straight-ahead stitching; I won't do that by hand if I don't have to! I could even bring the pinned stuff to a local repair service. We have one near my office! Although I wouldn't do that for a while; I don't want to take it off for more than a day until the days shorten again in autumn.

I have more black-out lying ready for the other window. Soon I will put that up too! And then I have a nicely dark bedroom. And I am sure that will also help it keep cool in summer. It can be a bit of an oven in there! 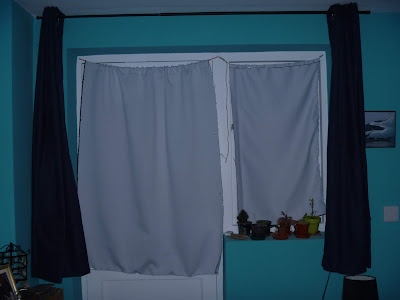 The improvised blacked-out window!
Posted by Margot at 07:12