This year Easter fell late. So late, actually, that after the Easter break there's only one week of term. I had figured that once I would reach Easter I would be OK! But the last two days before the break I had the infamous students conference. I didn't think I would be going underground on the Thursday night between the two conference days. It is stressful and I have to be at the venue early to set up the laptops and projectors. But when I got home after the first day (more about that in the next post) I figured I could pop to the meeting place (not too far away) and say hello to the others. They would walk to Park, faff a bit, and then go on to Gwaynllifion. I could just peel off after Parc! A tradition initiated years ago by Phil (be it that had been a different mine).

It was nice to see them. The turnout was amazing! Chris, David, Ed, Jason, Phil, Edwyn, Sharon and Mick. Pretty good! A well-chosen night. And it was even light, thanks to the clocks having changed! It was nice to catch up. And then briskly walk back to the car, drive home, be very impressed by the beauty of the newly snow-covered mountains, cook dinner, and have time to get ready for the next day! Success! 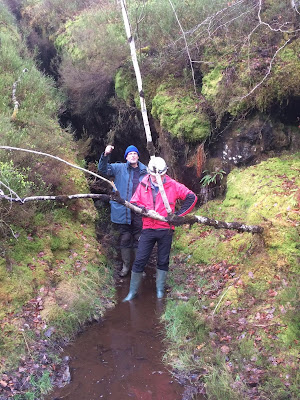 David waves a GPS around in spite of knowing exactly where he is, and Edwyn checks his phone for an equally unclear reason 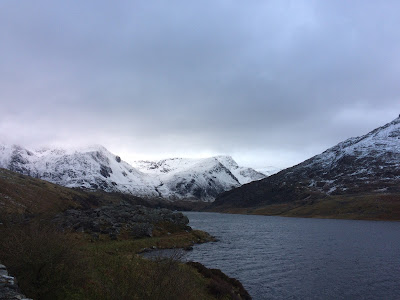