On with the dig, with new kit

A dig is often a long term project. Ours is too! I hadn't visited it since June but others, especially David, had been chipping away at it, slowly but steadily. This week we'd go back as David had bought a drill. That allowed him doing all sorts of cool things without being dependent on others! He can now go and bolt things, but what's more important for the dig: he can drill holes for Hilti caps and blow things up. As the dig is best dug by a very small team, that's actually quite good. So although we were with six people we went to the dig. We needed to try out this new piece of kit! And it wasn't his only one; he had bought a cheap endoscope too. He hoped we could poke it into possibly promising little holes between the rocks to see if they would offer a potential way on. Lots of kit to try out!

Since our last visit, Miles had made steps in the wall, so you don't need to travel along a rope to get up or down. That makes things a lot quicker! We got there and had a rummage. We didn't really have a specific target to blow up, but we wanted to try the drill. There was a rock in the floor that impeded progress so that became our target. It didn't go too well; David bent the firing rod when he whacked it to fire the Hilti caps, so it wouldn't come out. But we got rid of the rock in the end. We also tried the endoscope but that was a modest success. It's a nice toy though! If only because it has a different colour perception to us. Brown turns blue and red turns green and so on. Funny!

I spent most of my time sitting around. I had brought the map, in case I wanted to go on a stroll and match the places to the map. It's not easy to connect the two! And we had Briony (Simon's girlfriend) with us; she had just moved to our neck of the woods from before having lived in Wrexham, so suddenly she could join us on Thursday Nights. And she was on a mission to get to know the way in Cwmorthin so Simon took her on the round trip, and I joined them. It wasn't entirely pleasant as I stupidly had forgot my neoprene socks, so I was doing it all on thin cotton socks. That's very cold, and it rubs! But it was good to finally see where I was on the map.

At the end of the trip Briony and I even lost Simon, but that was OK as I know the way too. I stressed her out once as I had just looked on the map, and thereby blinded myself (maps reflect a lot more light than slate) so at the next junction I spontaneously went the wrong way, because I couldn't see. I only went wrong some 10m but Briony wasn't enjoying it. And when we got to the central chamber the others weren't there yet; we checked the exit to make sure they hadn't gone out and left a message or something, but the we bumped into them on the way back.

I'm not so sure about the Endoscope, but I'm happy with that drill as we'll need it again on Sunday, when we need to do some bolting. And next time we go to Cwm I hope I remember to bring the map again. It's quite nice to know where you are! 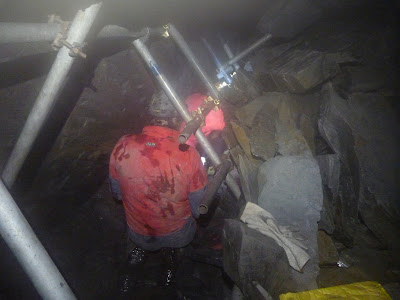 David ready to deploy the endoscope