One of the reasons I bought the house I bought was that you could walk the Carneddau from its front door. But I had lived in it for a year and no Carnedd had been touched by my feet! But now that I had reached this second Easter (the first was taken up by moving house) I had the time. And the weather was going to be nice! And I know you can go into the mountains in any weather but it's just not as pleasant with bad weather, and bad weather also tends to mean low visibility, and what is the point of being at 1km height if you can't see a thing. So after two days of pottering around I heaved my bag onto my shoulders and set off. I had already gone in this direction twice; once with Roelof (but that was meant to be a short walk) and once later, but on a day that turned out to be a bit too windy and me a bit too tired. Now it would happen!

Because of other things needing doing too I only left at 10:45. I set off through Gerlan, into the moorland, and then onto Mynydd Du. It was warm and sunny! I was wearing my hiking dress and a reassuring layer of sunscreen. And sunglasses. I saw one family in the distance; otherwise I had the mountain to myself. And I sat down for tea and bara brith before reaching Cwm Moch; that's what out get for setting off so late. But not an awful lot later I was at Foel Meirch and thereby further on this walk than ever before. And you could tell I was approaching the Carneddau. I started seeing lots of (ant-sized, for now) people in the distance. I think most people park up at Ogwen Cottage and walk up Pen yr Ole Wen! There was also a group of children with an adult coming my way. They struggled a bit with the snow patches that had started appearing.

When I got to Carnedd Dafydd there were quite some more people there. But well, the Saturday of the Easter weekend in the sun! If it's not busy-ish then, when would it be. I sat down for lunch. And enjoyed the views, as far as the haze would let me! It had been hazy for days; when I was in Rhos-on-Sea, it seemed like the Great Orme had vanished. That's quite a level of haziness! And it wasn't that bad now but still, beyond the next mountain ridge you could see little. 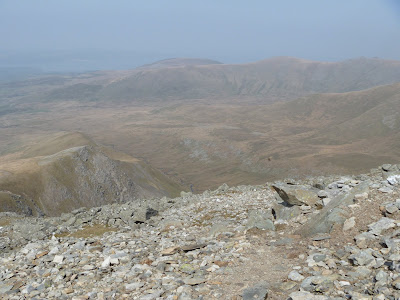 View on the valleys of the Caseg and Ffrydlas from above

Having climbed almost a kilometer I now had done most of the hard work. It was now time to walk leisurely above the Black Ladders! They were very pretty with a snowy edge. I had the group of children right behind me; that didn't do much for the serenity of the walk, so when I had Llugwy Reservoir in view I sat down for some more tea and let them pass. That helped! 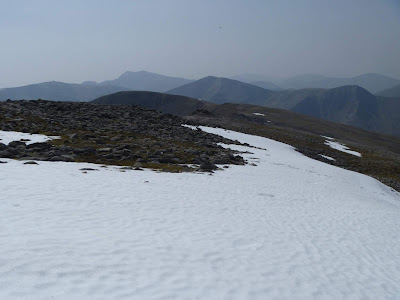 Looking Scandinavian near the top! 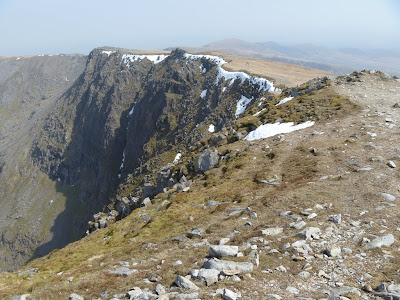 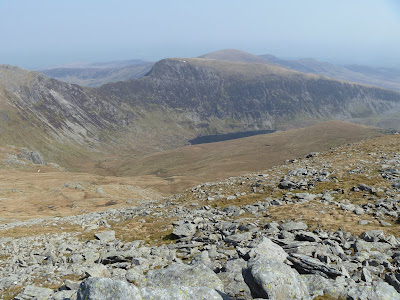 View on Llugwy Reservoir
I got to Carnedd Llewellyn in peace. I drank even more tea and then continued towards Foel Frach. Immediately I was on my own again! Would most of the people go down a Braich? I don't think they go down yr Elen; as I've never seen any indication there is a path down from there. But it was fine with me!

The landscape beyond Carnedd Llewellyn was dreamy and smooth. And it looked decidedly different from when we had gone here on a Swamphike! I got to Foel Frach and drank some more tea (I was running low by then). And went on, past Carnedd Gwenllian, and towards Bera Bach. I was bagging Carneddau in a way, but my feet were getting tired and I figured I had better just aim straight home from there. So I skirted y Drosgl and headed for Gyrn Wigau. And aimed home. I was now quite keen on having a shower, and putting my feet up. 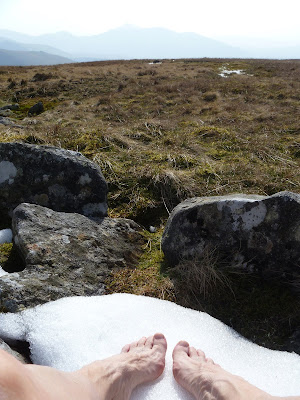 Cooling down my feet 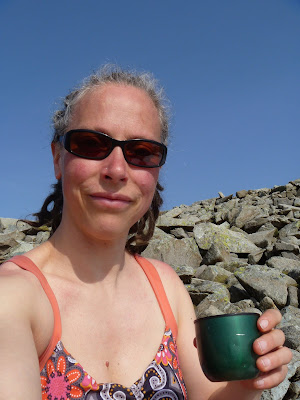 Feet in the snow, face in the sun!

I got back into the village with no water to spare. I still had food left! And I had been carrying all kinds of clothes I hadn't needed. But better safe than sorry.

I got home, hit the shower, grabbed a beer and a newspaper and made myself comfortable. Later I heated up some food I had ready in the fridge. I wasn't much use anymore the rest of the day but I had had an epic day in the mountains! It had been great!
Posted by Margot at 12:00