A job is easier done with the right tools! Two years ago I had had a blocked ear, and I had tried to flush out the blockage with olive oil. It had been quite difficult to poor the oil into my own ear. In the end it didn't work as the blockage was on the inside. But now my ear was blocked again! As this time I hadn't had a cold I thought the blockage might be on the outside. The blockage had been there for a while but I was so busy I hadn't got around to doing anything about that. But one day I had enough. And I decided I would go more high-tech this time. I managed to pilfer a plastic pipette (the advantage of working at a university with labs). And I figured I needed a small reservoir to heat up the oil in. An egg cup! And with these implements it is a doddle to get warm oil into my ear. Just do an oil session before you hop onto your bike to go to work! And it worked; after only a few days my ear yielded some unsightly gunk and was clear again. Hurray for self-medication! 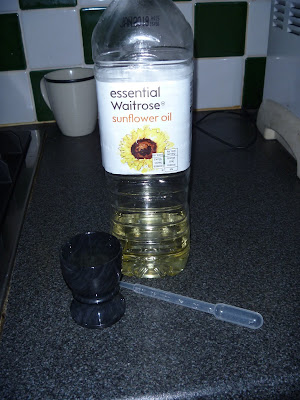