I've lived in this house for a year now! A tiny but more than a year, to be precise. And my stereo hadn't left its box yet. It was about time it did!

I had decided it could live in a cupboard in the living room, out of sight. So I put it there! And put a CD in to test. (Under the Pink by Tori Amos, since you ask). And it didn't work. I didn't know why. I decided to pull the cables out again and try anew. I couldn't detect me doing anything differently but now it worked! And that's good; now I can play music. I have a radio in that room but the signal is a bit iffy and sometimes you just can't listen comfortably. Now I have an alternative!

At the moment the speakers are standing on the ground. I have no problem with that in itself but they look out of place. Maybe I should keep them in the cupboard while I'm not using them. Or maybe cover them with something that stops you seeing them but doesn't stop you hearing them! Watch this space.

And now I also should move my CDs down. Yes I still have CDs. I have tried a few times to move on from that technology but without much success. I have a small, fairly old iPod (ten years old!) but I'm currently not sure where it is. I had bought a bigger one but it had ceased working. Then I had used my Samsung phone for a while, until I started using it as a phone. That required a whole new approach though, as it wasn't an apple and didn't run iTunes.

I intend to find my old iPod back. And when it's time to upgrade my phone, I might strip a lot of apps from my old phone and plonk a lot of music on it and then use it full-time as a carrier of music. That will be another six months or so! But I have something now. It will do! 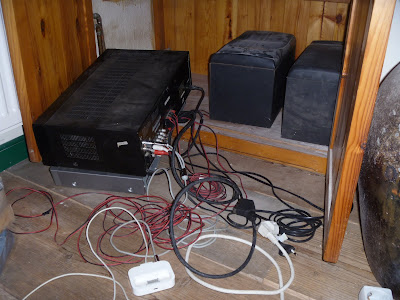 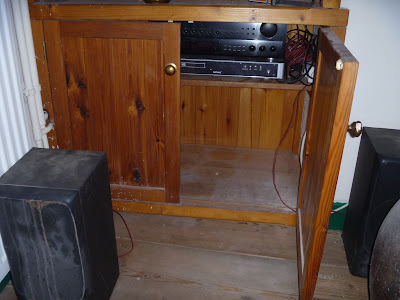