Another visit by Monique

In May, my friend Monique came to visit me. That was lovely! We have been friends since before I was allowed to vote. And I dare say we will be for a long time to come! And by coincidence, she sometimes has things to do in Manchester. That's not far away! So she figured she would pop by again. Great!

Her business in Manchester covered the weekend, so she would only appear late in the afternoon on Sunday, and leave on Wednesday morning. That meant I had to have my stuff for the rest of the week ready beforehand! But that's a small sacrifice.

I picked her up from the railway station. That day we didn't do much more than drink tea, drink beer, cook and eat dinner, and catch up. Nothing wrong with! And talking revealed our activity for the day after: Monique was keen to see a mine. Well, that can be arranged!

The next day we did a trying-kit-on-session; she had only brought smart clothes so she needed to borrow stuff from me, and we're not the same size. We sorted a furry suit, boots and neoprene socks. The rest would be fine! We thought.

We took it easy in the morning, and then drove down. We first had a coffee in the Lakeside cafe. There we met a substantial Go Below crew. Nice! At the parking lot we bumped into some southerners who had come up before for some Thursdaynighting and such things. When we got to the Manager's office we saw the door was open so we had a peek inside, upon which we met Pred; he's the one doing most of the work of doing up the MO, and quite a legend. Nice to meet him!

Then we finally went in. I was thinking of doing the round trip, so I walked us to where you go down a bit beyond the Old Vein Incline. But Monique only just fit into my caving suit, and couldn't bend normally! We had forgot to try that out. It had still been a bit damp from the Parys trip so I had been reluctant to put it on her. Now we paid the price for that! She decided she didn't want to go down. That restricted us a bit. And neither of us thought of her just taking it off and proceeding in the furry suit alone.

We scampered around a bit on Lake Level, until we got to the passage I had helped enlarge in spring. That worked for her, tight suit or not! That was good. The steps that followed were OK too. That got us to the bridge! She was alright to cross that. That was a nice photo opportunity too! And the next step there is either a traverse or a zip line; she wasn't feeling that. But I was feeling peckish, so I suggested we'd have lunch there. We did! 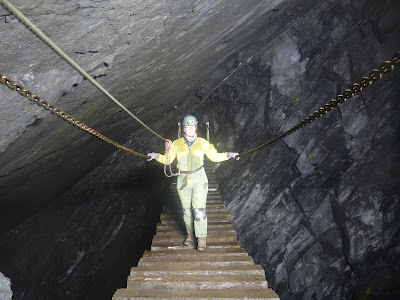 After that we did a bit of walking around on that level, but Monique was getting tired so we soon started our way out. At the entrance we did the obligatory entrance pic, and then we went on. Passing the manager's office again we saw Miles come out; we had a small chat with him too. And we waved at Pred. Then we were off, back to the cafe for more hot beverages! A good day. 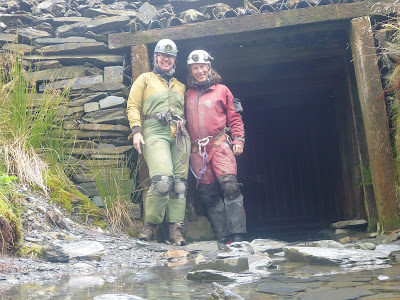 The next day we would go for a walk with Pi. Guy had heard I would have a guest and suggested we join him together. Excellent idea! But we would only go at lunchtime, and I wanted to get more out of Monique's visit, so we went for a stroll on Penmon first. Nice! The weather was good and the views lovely. 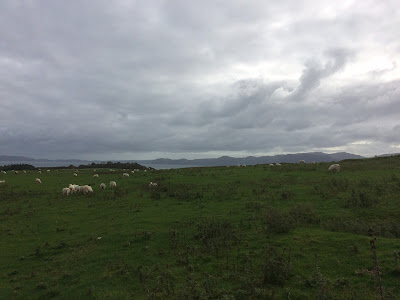 We then went on to meet Guy. And Pi! Monique was impressed. Of course she was! He's a lovely dog and Guy is a lovely man. The two of them discussed dog training in detail. I am just a frisbee-throwing stooge! And content with it. 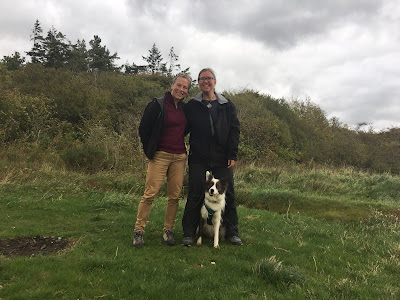 When the walk was done Monique figured we had done enough walking. We spent the rest of the afternoon drinkin gtea and beer! And finished off with dinner in the reltively new tapas restaurant in town. We both liked it!

That sort of was the end of it! The next morning I brought her to the railway station. It had been good! She said she thought she'd come back again, this time husband and all. Would be nice!
Posted by Margot at 15:25