It was time for a new venue! I don't know where we had it from, but a plan emerged to go and find an adit of which we had a survey from the early fifties. We knew where it was; it was just that nowadays, there was no path to it, only a haphazard staggering through the woods, hoping to stumble upon the give-away spoil heaps. And then we could only hope the  place hadn't collapsed some 10m from the entrance (we knew from hearsay the entrance was still there).

On the way there, David showed me the beach site of the upcoming field day. That day has a mountain an a beach part, and tides influence which part we do first. We like to work downhill, but well, if the beach is simply not there in the afternoon due to tides then we can't, of course. He thought it would be OK, and the tide this day would be comparable to that of the field day. And it looked feasible! The beach was accessible. Good! But then we had to go on to the meeting place for our underground adventure.

We gathered, caught up, set off, and got to where we had to leave the path. We staggered and stumbled most talentedly! A clunky word but it will do. Anyway; David staggered in the right direction, found the spoil, and the concomitant orange stream coming out of the adit. Excellent! We went in.

It was clear not many people had been here! It went and went. And the survey seems to still be accurate. And we found some nice artifacts and cave pearls. 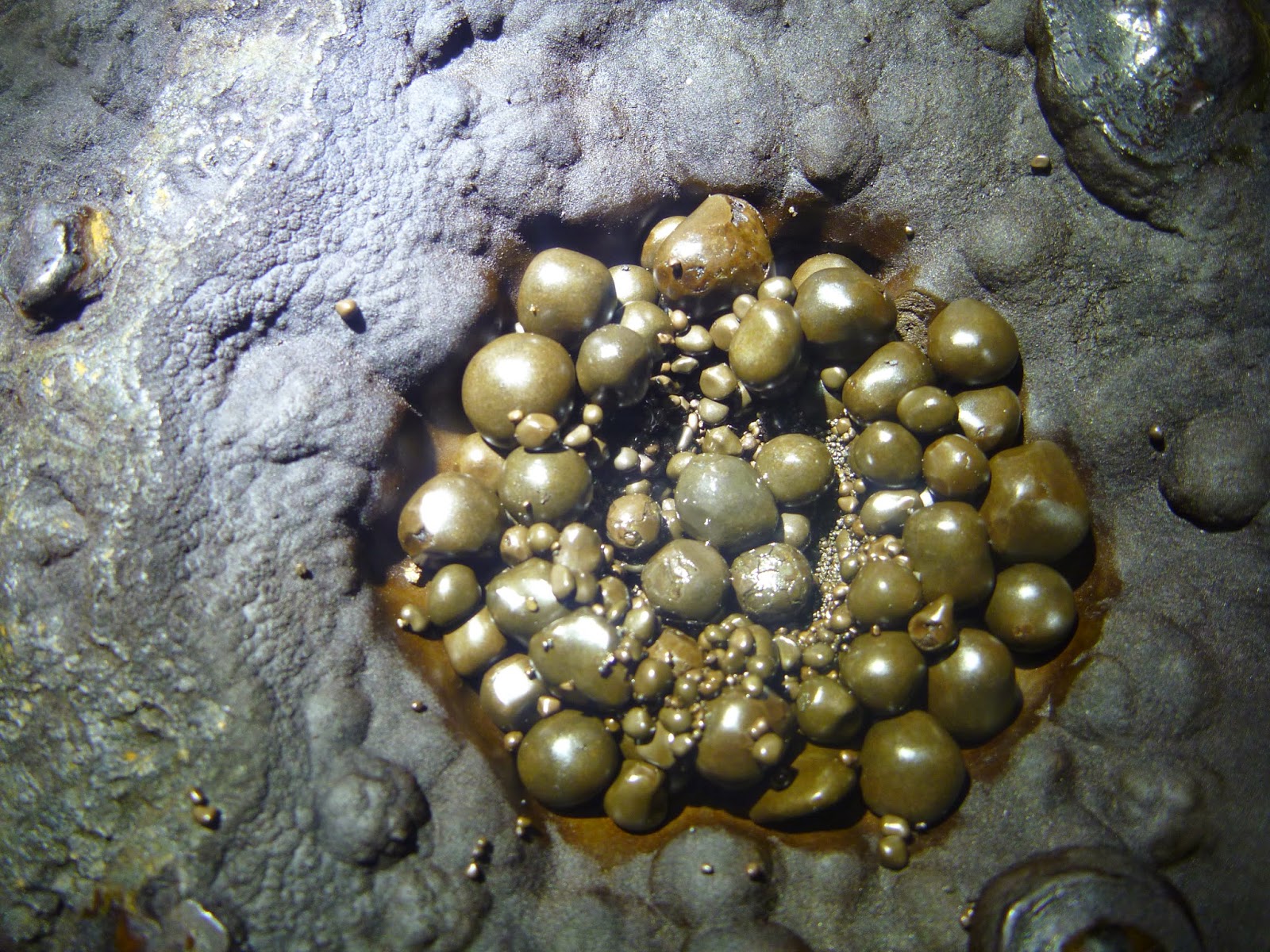 At the far end I found myself somewhere at the back of the line of explorers when we had to croutch through a low bit with lots of rubble on the floor. I could see that just before me, the ceiling went up! Something was there! And a rope hung down! All very exciting. I could see David's legs vanish up. I got very impatient! There was no space for me in there. I wanted to be part of the action!

When it was clear the others at the bottom of the inclined shaft, which was what it was, didn't want to go up they made way for me and I could follow. It was very nice! I couldn't take pictures as I had only brought the small tripod, but it was a beautifully decorated place. Phil came up too. And when I came down again some of the men were clearing up the rubble; the level continued, but with rather deep water. And the rubble kept that water there. The men had already managed to lower it several inches! But I didn't care so much about deep water, and walked in. The water, thick with ochre, only just reached my underwear. The tunnel didn't go a whole lot further.

When I was standing at the end, which was a trifurcation with all of the fork teeth only going 1.5 metre or so, I saw someone approaching and waited. I sang a bit to myself. And it sounded spiffing! How unusual! Maybe they had invented the autotune down here. These three dead ends around me gave amazing reverb. I stayed a bit!

When I came back to the rubble everyone was leaving. Clearly, not everybody was keen to get ochred up. They don't know what they miss out on! 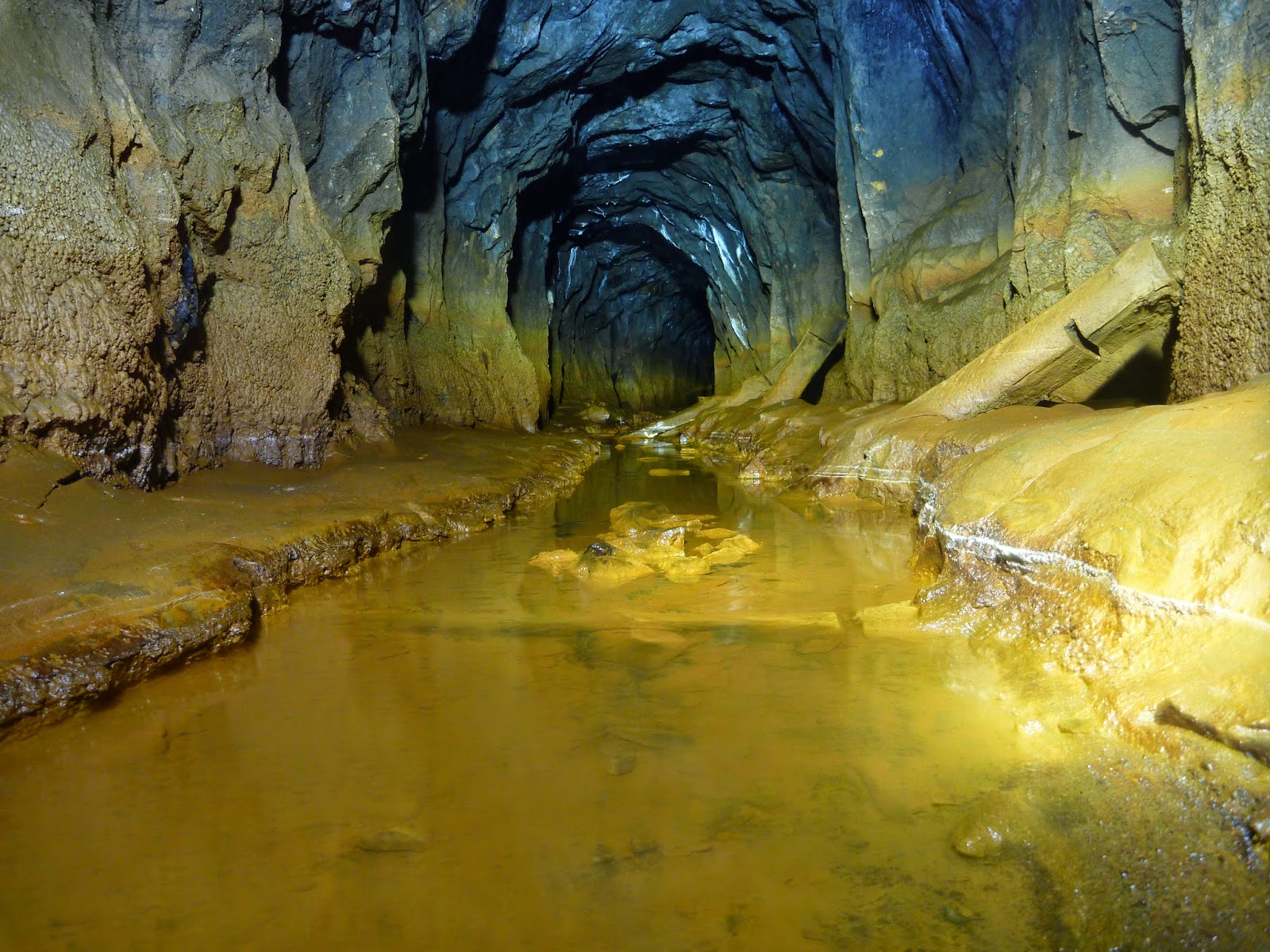 It was clear the water level in the bit nearer then entrance had been a lot higher...

Once out one of the men brought out a sandwich. David followed. Paul grabbed a chocolate bar. It turned into a picknick! Fortunately, Mick and David had brought more than they needed so the badly prepared shared in their food. Very cosy!

Altogether we were still back at the cars early enough for a half pint. That hadn't happened in over a month! It was nice. I hope I can keep this going; I'm turning into a bit of a weird office recluse, and my weekly escape helps to keep that in check!
Posted by Margot at 18:28